The Boise State football team hits the field this afternoon at 3:00pm at Bronco Stadium for the first open scrimmage of fall camp. What do you mean you have a full-time job and can't take off in the mid-afternoon to watch football? Lame.

After the scrimmage, I'll post some thoughts and observations on the team's first public appearance, for those of you out-of-towners/employed. For the rest of us, here is a primer on everything you need to know for today's scrimmage. Oh, and a numerical roster. You should probably have that, too.

The faithfully fluffy news media have a gentleman's agreement with Boise State to not divulge pretty much anything of strategic note during fall practice. Therefore, injuries are anyone's guess.

Tom Scott hinted at an Aaron Tevis nick, and there have been reports of a Bronson Durrant appendectomy. Besides that, we know Kirby Moore is out with a broken foot and that Michael Atkinson has an ankle injury. Who else will join the walking wounded on the sideline? It's something to keep an eye on, although street clothes in the first scrimmage of fall camp does not necessarily mean injury. It could also mean that it's hot in August and not everyone feels like practice. I'm looking at you, mysteriously absent Ian Johnson from 2008.

The Chase Baker love affair of 2009 is in full swing, and Bronco fans get their first chance of the fall to answer the question: "Who's Chase Baker again?"

Reports out of camp are that he is the team's No. 1 defensive tackle, even with the indomitable Billy Winn lining up beside him. He saw some action last fall as a true freshman and really took strides this offseason. Allegedly. I'm anxious to see for myself just how far Baker has come. And by "anxious," I mean "excited beyond words."

8. Who gets time with the first team offensive line?

BroncoSports.com promised me that we'd be seeing the roster split into first-team, second-team, third-team units for the fall scrimmages, so it will be hugely interesting to note which players fall into the first-team group. You have to assume Thomas Byrd is there. You also have to assume that you have no idea who else will be. Personally, I'm hoping for an upset, like maybe a Faraji Wright or a Will Lawrence. Or maybe Ryan Clady coming back to use his final year of college eligibility. 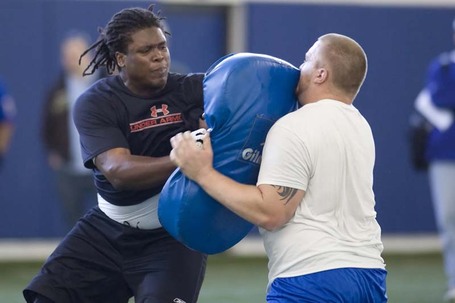 It is a three-man race to replace Ellis Powers at perhaps the most key position on the Bronco defense. If I had to choose, I would put the depth chart at Winston Venable, Doug Martin, then Jason Robinson, using my expertise of not having seen any of them play since the spring.

6. Any true freshmen wide receivers worth burning a redshirt?

I've talked about Geraldo Hiwat already. Others have spoken about Aaron Burks. I'd have to think that Bronco coaches would really need to be wowed to forego either's redshirt. But that's what scrimmages are all about. Right, George Iloka?

The Bronco WR roster already has Austin Pettis, Titus Young, Tyler Shoemaker, Mitch Burroughs, Michael Choate, and Chris Potter. If that gets the Broncos by until Kirby Moore is healthy enough to go, Burks and Hiwat might end up waiting another year to see the field for BSU.

Apparently, this matchup has been killer in fall practice. Titus Young is fast. Kyle Wilson is amazing. Good things are in store for Bronco fans this fall either way.

There has been at least one recorded instance of Young getting the better of Wilson, and Wilson has made his fair share of plays in fall camp, too. Both players have been named Coach Pete's Camper of the Day. I am giddy with excitement about seeing them compete against each other. It is going to be a good day.

I'll try to take a picture because I just don't think words can express.

He's probably not 2009 material (what with the way he's been fumbling in fall practice and what with him being the future of Boise State football once Kellsy is gone), but I'd be lying if I said I wasn't out of my mind with anticipation at seeing Johnson in person.

From what I hear, he is either the best running back the Broncos have ever recruited or he is not human. Either way, I'm stoked.

2. The three-headed kicking monster of Brotzman, Elkin, and Pavel

Lou-Groza-watch-listed Brotzman, moral support Brad Elkin, and newbie Jimmy Pavel are flying under the radar as one of the more important camp battles that no one is talking about.

Let me start with Brotzman. It was evident that last year's all-encompassing kicking duties hurt what Brotzman does best: make every field goal he ever attempts. KB went from automatic to "I sure hope he makes this one." It was nice that he added a revolutionary rugby roll punt to the Bronco special teams repertoire, but at what cost? Maybe the Poinsettia Bowl.

I'm rooting for Elkin to take back the punting duties from Brotzman, so it will be tantamount that the big E do well in today's scrimmage. I've never seen Elkin rugby punt, so I'll be curious if that is a new part of his game this fall. Also, Brad is a member of this here site, so I want him to succeed even more so than usual. Hi, Brad. Never mind about those jokes I made at your expense last year.

Pavel is the wild card inasmuch as I have no idea how he might be involved this year. Maybe he'll be the trick play punter. Maybe he'll handle kickoff duties. Maybe he can morph into a kicking net. I really don't know, but I figure I'll know more after today's scrimmage. 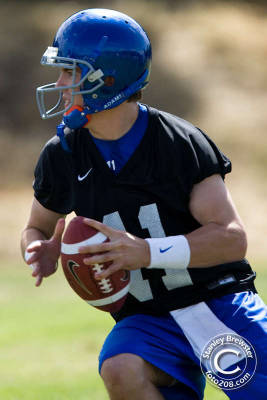 He is smooth, he is confident, and he is sure to be even better this year than he was last year. He didn't make this list because his job is in jeopardy or I'm worried about that mythical Bronco QB second-year slump. He's on the list because I just love watching him.

And I've missed him terribly.