The Week in Boise State football: Stop. It's scrimmage time.

Share All sharing options for: The Week in Boise State football: Stop. It's scrimmage time.

The advent of Fall Camp is cathartically revitalizing if you're a member of the local media who gets invited to such things. We fans, on the other hand, rely on our Boise State jones from reading the occasional, non-specific blog post and imagining what things really looked like. It's a little like reading The Time Traveler's Wife when the movie is playing in your local theater. Don't deny us our live-action romantic dramas and Boise State football!

Well, all that ends on Thursday.

(Inside: Geraldo Hiwat gets his due, watch lists, a classic Japanese game show, and Nevada going undefeated.)

Thursday marks the first Boise State scrimmage of the fall/summer, and unless the BSU powers-that-be decide against all that is good, right, and fair in this world, it should be open to the public.

I'll be there with numerical roster, binoculars, and pastry in hand. Come over and say hi if you want.

Person of the week

Many players made a name for themselves in the newcomers' practices of Boise State's first week of Fall Camp, including RB Malcolm Johnson and the freshmen QB duo Southburo. But the man getting most of the press is Capital High grad Geraldo Hiwat.

The kid is 6-3, 195 pounds and he can really get up over the middle. He made a trio of splendid receptions, including a one-hander to the post and he went low to get a 10-yard out.

At a time when presumptive non-redshirter Kirby Moore is sidelinin' it with a broken foot, Hiwat (and fellow frosh WR Aaron Burks) is turning heads with his impressive play. Dave Southorn likes him: "He's got a nice frame (6-3) and showed some good hands today." Chadd Cripe, too: "Some of the Broncos' new offensive players made a bunch of nice plays Thursday, including receiver Geraldo Hiwat." And Dustin Lapray wants to take him bandana shopping: "There are some serious standouts in the newcomer crowd. Take Geraldo Hiwat: He has the frame (6-3, 195) to be a terrific target in this offense."

The only knock on Hiwat is that he is a raw talent, by way of the Netherlands, who could need more time to develop as a player. Weren't they saying the same thing about Tyler Shoemaker last year?

Geraldo Hiwat, I give you FOUR Paul J. Schneiders.

Meme of the week

You know football season is just around the corner when national awards start pumping out watch lists. Kellen Moore, Thomas Byrd, and Kyle Wilson have landed on some of them, along with scores of other players nationwide whom the selection panel recognize by name.

If everyone else is doing it, why not me? Ladies and gentlemen, I present the Tom Brandstater Award watch list for the WAC's most overrated quarterback. 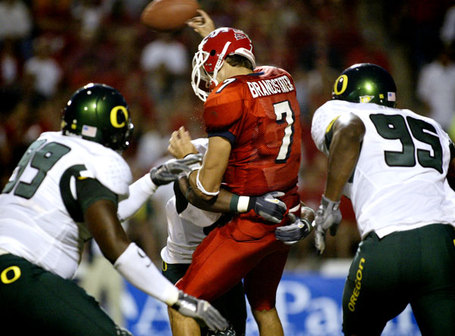 Playing soccer with binoculars strapped to your head.

The United States men's soccer team takes on Mexico in Azteca Stadium on Wednesday afternoon. It's a little like a WAC team visiting Bronco Stadium, although on Wednesday, I'm rooting for the WAC team.

2010 has all the makings of an undefeated season.

Funny, I think they are talking about the Wolf Pack.

"One would think the Oregon Ducks and their fans would admire the Broncos for their accomplishments and see them as an equal instead of losing to Boise State in humiliation."