The atomic clock actually says that we have just 60 days until the Ducks hit the blue turf (hard).

Boise State does not have every number from 1 to 99 assigned as of yet...so today (and all other days where this occurs) I will be highlighting a walk-on or new addition to the team that could have the number that we've currently landed on. If that made any sense to you at all, we'll move right along.

This walk-on walked himself into one of the Broncos' thinnest positions on the roster, which just so happens to be the reason why I was able to ride Star Tours so many times at Disney's Hollywood Studios in Orlando. Point being, Gholson (6'4", 245) has every opportunity to make an impact sooner rather than later. And he appears to have the pedigree to do it. A product of La Costa Canyon High in California, Gholson was first-team all-league and an all-conference selection his senior season. At La Costa, he also served as the team captain and was a first-team all-academic selection. Ironically enough, the latter fact was not apparent on this TruPreps questionnaire.

One word that best describes me: Out going and dedicated 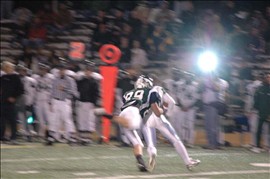 Photo taken with a Walgreen's disposal camera. (via www.trupreps.com)