WAC Football Preview 2009 is officially in the books, meaning that the college football season is just around the corner. Apparently, it also means that the city of Salt Lake can stop "earmuffing" it.

For full coverage of the WAC Football Preview 2009, check out the posts here at OBNUG or head over to the Statesman or Press-Tribune, who have both been rock solid all week. Speaking of hard, dense inanimate objects, it's time for OBNUG's preseason player of the year picks.

Before I get started, I would like to point out a couple of things.

So without further ado, here are OBNUG's preseason player of the year picks in the WAC. Enjoy.

Preseason offensive player of the year 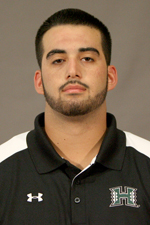 Estes may be the most talented offensive player in the conference not wearing blue and orange and not a 6'6" freak of nature runnerback. And he has quite the resume to back up his talent.

The only question of whether or not Estes can lay claim to a WAC OPOY award at season's end is how the Hawaii offense performs. My personal opinion: It would perform much better if Estes called his own number on the Center Sneak a couple times each game.

Preseason defensive player of the year

I realize that I am going out on a limb picking a Utah State defensive tackle who may not even be a starter going into Week One. But hey, it's not like my preseason POY reputation is at stake. Right, Nick Graziano?

The way I see it, Utah State will continue improving this season, perhaps in ways not quantified in the win column, but improvement nonetheless. A big part of that improvement will need to be the play of the defense. New head coach Gary Andersen loves defense. His defenses at Utah specialized in defensive line play. Utah State has defensive linemen. Mauga is one of them. Ipso facto, defensive POY.

If you're still not buying it, I don't blame you. It's quite a stretch. But Mauga at least has the potential to be a stalwart D-lineman for the Aggies. In JUCO ball, he had 80 tackles, 10.5 sacks, and two picks during a stellar career that earned him an award for San Diego's best JC player. He is 5'11", 306 pounds. He has a brother named "Rainbow," which should give Mauga added motivation when the Aggies face Hawaii.

To me, this evidence screams defensive POY. To the WAC, it provides further justification for continuing to not give me a preseason vote.