Media days in Salt Lake City came to an end today, but not before Hawaii head coach Greg McMackin offended millions, Idaho head coach Robb Akey cracked some jokes, and I made a discovery that will change my life forever. Please do read on. (Here's Day One if you missed it.)

McMackin made waves in today's session by using the term "faggot" to describe a team dance that Notre Dame performed at a Hawaii Bowl banquet last December. And then, tragically, he kept on talking.

"Don't write that 'faggot' down. I was misquoted," he said. "Just please … cover for me," McMackin said Thursday. "Go ahead, say ‘faggot dance.’ No. Please cover for me on that, too — right Karl [Benson, the WAC commissioner]? I’ll deny it. Anything else?" 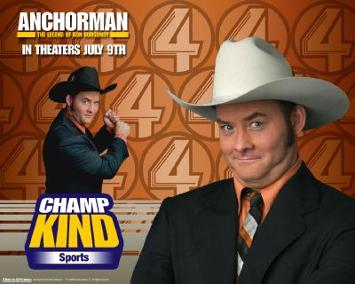 McMackin came back out later to apologize for reals. I'm not sure it stuck.

The opinion of pretty much everyone in the media and across the Internets is that McMackin shouldn't have used the term. Well, duh. Even he knew he shouldn't have used it. What's worse is that he thought he could get away with it by asking the media on hand to just forget about it. Not likely. Troy Oppie is a cold-blooded killah.

And to think, Karl Benson had spent so much time getting traction for WAC football in the homosexual community.

(Note: Get a load of ESPN's headline choice for the story. Click for larger view.) 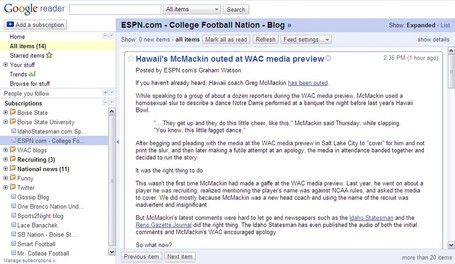 Why? I don't know. But I'm following it.

Apparently, the Akeystache was in fine form at media days today, telling stories, making jokes, and largely hiding the fact that he is 3-21 as coach of the Vandals.

(Akey) sometimes has his team eat its meals out of bowls to reinforce its goal of reaching a bowl game.

"I expect to be able to fulfill my contract. I expect to sign a new contract before that one runs out," said Akey, who is in the third year of a five-year deal. "I hope they can afford me."