Believe it or not, last year was supposed to be New Mexico State's year. And if that's true, then I cringe to think what this year will be like.

Hal Mumme stacked his roster with the finest talent that could tolerate living in Las Cruces, and he set his sights on a bowl game, a WAC title, and a long overdue visit to the College Football Live set.

And then the Aggies went 3-9, losing their last seven in a row.

What went wrong? Pretty much everything, right down to Mumme being hired in the first place. The good news is that all of Mumme's mistakes at New Mexico State are gone. The bad news is that they are gone because Mumme didn't bother leaving any evidence of a Division I-A football team around after his departure.

Former UCLA defensive coordinator DeWayne Walker is left to pick up the pieces ... if he can find any. Oh, look. There's one shaped like Tony Glynn. Oh. Never mind. It was a homeless man stabbing a dog.

What was DeWayne Walker thinking?

We've all made bad career moves at one time or another. Mine involved getting a degree in journalism. Walker's involved potentially ruining his legacy as a football coach.

To be fair, Walker was probably one of the most qualified candidates in the 2008-2009 coaching derby. He has NFL experience, and he has been around the block in college stops like UCLA, USC, BYU, Cal, and Oklahoma State. His getting the New Mexico State job was really his best chance at landing a head coaching gig in college. Can you blame him for jumping on the chance when he had it?

Maybe a little. But give him 10 or 20 years, and he'll get New Mexico State turned around yet. 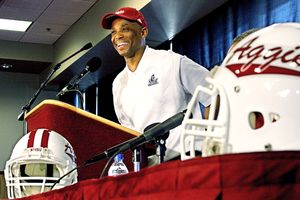 Perhaps the happiest Walker will ever be at NMSU. (via sports.espn.go.com)

I miss Chase Holbrook. And so does Carl's Jr.

Yes, Holbrook did have that one good season, didn't he. I believe it was 1998 or something.

NMSU will miss Holbrook, too, if only because his graduation leaves the Aggies super thin at the quarterback position. Holbrook's backup, J.J. McDermott, left  for SMU, which gives you an idea of how bad things must be at NMSU. The quarterback battle, then, is down to junior college transfer Jeff Fleming and redshirt freshman Trevor Walls. Neither player has thrown a single pass in Division 1-A or a good pass against the NMSU defense in practice.

Will someone please take the 3-3-5 defense out back and put it out of its misery?

The Aggies' defense last year was better than terrible but still not good. Fortunately, Walker is a defensive mastermind, and he knows a gimmicky D when he sees one. The 3-3-5 is gone, to be replaced with the 4-3. Now the New Mexico State defense can be bad while looking like everybody else.

Its badness will probably be a result of the team losing its two starting safeties from last year and lacking talented players along the defensive line. The two Aggie corners are decent and experienced. Beyond that, I don't know what to tell you. Scout.com claims that the defense will be fast. Let's just hope they don't tackle like the NMSU mascot.

Are you as excited as I am about that season opening game against the Vandals?

No. But Aggie fans should be. The September 5 game at home against Idaho will be a great opportunity for NMSU to get its season off on the right foot. With Prairie View A&M and UTEP to follow, any normal team would think 3-0 would be a very real possibility. The Aggies want to be a normal team. The season opener will show just how close (or far away) they are.

Blocking: what's NMSU's stance on that?

The Aggies have one good player in OG Chuck Taylor. (Note: It has been brought to my attention that Taylor has decided to transfer to a I-AA school. HT: BC) So look for a lot of dive plays to the right side of the formation this year.

Filling the other four spots is a priority, but no player in particular jumps out as someone capable of doing much good. Mumme left Walker's cupboard pretty bare, and the scraps he did leave are used to an offense built on passing. NMSU wants to be a running team in 2009. Good luck with that. (And a premature "Sorry" to RBs Tonny Glynn and Marquell Colston.)

I wish I had something good to say about the Aggies, for DeWayne Walker's sake, for Marquell Colston's football future, for Bleed Crimson's endless optimism. But I don't.

The offense will be bad with a new quarterback, forgettable offensive line, and nine-man fronts week in and week out. The defense will be soft with undersized players, tiring play counts, and a general lack of talent. But as Harvey Dent said in The Dark Knight, "The night is darkest before the dawn."

Although I think Walker will find it easier to relate to Dent's other line: "You cannot leave me alone with these people."

Perfect situation
Not losing every single game on the schedule

Reality
The Aggies get a win over Prairie View, play several teams close, write off 2009 as a rebuilding year, and come back stronger in 2010