The atomic clock actually says that we have just 62 days until the Ducks hit the blue turf (hard).

Kevin Sapien was everywhere last year, if you consider offensive tackle, offensive guard, starter, and bench to be everywhere. The good news is that Sapien played in 12 of the Broncos' 13 games and was the man most often credited with being the starting right guard. The bad news is that the position was never his to really keep as he bounced around from one spot to the next with great regularity. One could assume that a year spent serving time in RotationsVille would make Sapien a shoo-in for a starting RG in 2009, but he missed all of spring practice with an injury and will have his work cut out for him when fall ball hits.

Sapien comes highly recommended: a four-year letterman at West Torrance High (California) and a first-team all-area and all-league performer. He spent 2006 redshirting and 2007 backing up. His Boise State career arc seems destined for a signficant starting role over his last two years in a Bronco uniform. And then the sky's the limit. Well, the CFL's the limit, most likely. Sapien is currently listed as the No. 75 guard in the 2011 NFL draft class by someone who actually makes it a point to know such things.

Fun fact: When browsing Google News alerts for Sapien's name, he is most often mentioned as "Sapien - five yard false start penalty" and "Sapien - 15 yard personal foul." You're right. That fact wasn't fun at all. I'm sorry I brought it up.

Bonus fun fact: Sapien wears a neck collar. There. That was pretty fun, wasn't it? 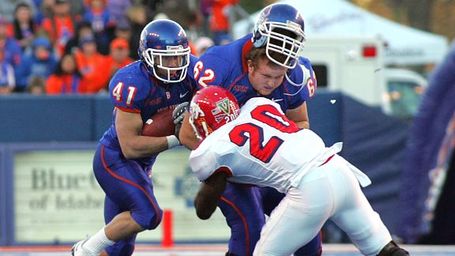