The atomic clock actually says that we have just 37 days until the Ducks hit the blue turf (hard).

Brown meant everything to the Encinal High School Jets during his career there. He was a true leader who carried the team on his back to improbable wins and helped them reach new heights. In 2008, Brown led his team to an undefeated season and their first North Coast Section Title in 28 years. In their championship game against Novato, Brown accounted for all 5 of the teams TDs in a clutch 35-28 win. Brown's stellar senior season garnered him armloads of honors, including second team All-State, first team All-Conference (for offense and defense), Bay Shore Athletic League Offensive Player of the Year, and the San Francisco Chronicle Regional Player of the Year. Brown was named Bay Area News Paper Group East Bay Football Player of the Year, beating out future teammate Joe Southwick in the process. Though Brown's offensive prowess at QB (1,364 yards passing, 862 yards rushing, 37 TDs) got him the most acclaim, his defensive efforts were equally impressive. In his senior campaign, Brown recorded 92 tackles, 8 sacks, and 2 blocked punts. Brown may be called upon this year to play on special teams or certain defensive packages. The Broncos won't be in dire need of true freshman on the defensive side of things, but Brown is a rare talent like Marty Tadman (but faster), and we all know how quickly Tadman saw the field. Keep your eyes fixed on this one...Jonathan Brown's the real deal. 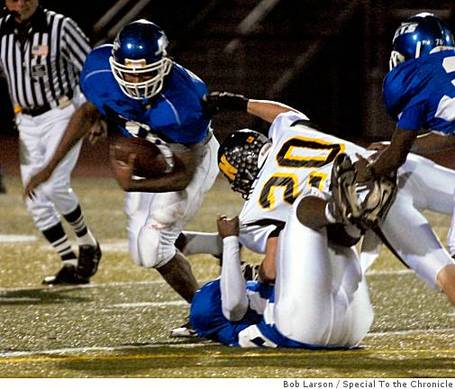 Marty? You look different than I remember.