There's a reason why people do not believe Boise State's schedule is very strong. That reason is Miami (Ohio). And Bowling Green, and the WAC, and UC Davis. But a good twenty to twenty-five percent is Miami's fault.

Needless to say, Miami didn't plan things this way. Up until about 30 seconds before last season kicked off, expectations were high for the RedHawks. They had a strong bunch of returners at key positions, their coach was potentially above average, and they played in the winnable MAC. They were, for all intents and purposes, LaTech East.

Flash forward 12 months, and it is obvious that they didn't fulfill expectations, winning two games all season (one against Div. I-AA Charleston Southern and the other against 2009 Boise State opponent Bowling Green - serendipity!). They fired their coach. They have been roundly ignored by Graham Watson.

It is not a particularly good time to be a Miami fan/player/alumni. And it's not going to get any easier on September 12 in Boise, Idaho.

Why does Miami's new head coach look like he wants to hurt me? 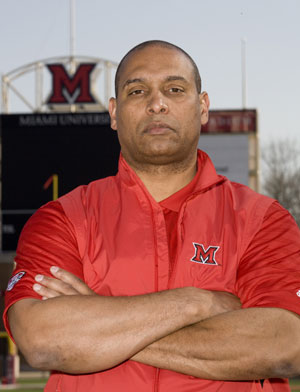 "Come to Miami or die!" (via images.athlonsports.com)

Probably because he just got done serving time on Charlie Weis' Notre Dame staff. Mike Haywood was the Fighting Irish's offensive coordinator and the man most responsible for bringing the air-it-out attack to ND and familiarizing the American public with Jimmy Clausen and his Kentucky waterfall. It was not all good times for Haywood at Notre Dame, especially the times when Weis took over playcalling from him. But he did show enough gumption or plead hard enough to get the H out of South Bend for the RedHawks to make him their man.

Supposedly Haywood's really good at recruiting, which will have no bearing on the Boise State game whatsoever. I assume his greatest recruiting tactic is arm wrestling. I mean, look at the guy.

Who is left to carry on the great Miami Ohio quarterback tradition that Ben Roethlisberger started?

OK, first off, I may need to help you with your definition of "tradition." Roethlisberger is perhaps Miami's most famous athlete, but he hasn't exactly ushered in a quarterback U feel at Miami University. This year's starter is Daniel Raudabaugh, a senior who was supposed to be good last year as a junior. He wasn't (1960 yards, 8 TDs, 9 INTs). And there's really no telling if he'll finally fulfill his potential or if he'll screw the pooch once again in 2009.

Who is Miami's most dangerous player? And is he dangerous in a Dennis-Hopper-in-Speed way or greenhouse-gases-in-An-Inconvenient-Truth way?

I see Givens as more of the Dennis Hopper in Speed type of danger. Sure, he's dangerous, but only if you're riding on a bus in Los Angeles or, to wit, playing bad pass defense by not doubling him. I'll leave it at this: He will be one of the best wide receivers that Boise State faces this year. Whether or not that matters is debatable.

Is anyone of note left on the defense?

The RedHawks graduated two of the most talked about linebackers in school history in Joey Hudson and Clayton Mullins. They lost six starters from last year, including their top four tacklers. The biggest name left is LB Caleb Bostic, the oft-injured third wheel to last year's lauded linebacking group. Bostic is a good player, perhaps Miami's best, but the defense as a whole (with zero INTs from its secondary) has a lot of work to do.

Does Miami have anything going for it?

One other thing Miami has going for it: J Crew. Holla!

Miami may be headed in the right direction with a charismatic recruiter for a head coach and a program with room to grow in the MAC. In fact, when the RedHawks return to Boise in 2012, they may be able to keep it within a couple of touchdowns. Circle your calendars!

This year, though, a two-score game would be a mighty tall task. The Miami offense returns enough players to seem experienced, but were awful enough last year to appear talentless. The defense lost its two hearts and souls and will have a tough time competing against high-flying offenses like the Broncos'. Throw in four straight road games to open the season, breaking in a new coach and system, and the immeasurable weight of being referred to in parentheses, and you have the makings of another learning experience season for the RedHawks.

The Boise State lesson could be a particularly tough one.

Reality:
Miami struggles in non-conference, wades through the MAC, and finishes 4-and-who-cares.

Previous previews of 2009 opponents: Oregon. Still to come: Everyone else.