The atomic clock actually says that we have just 88 days until the Ducks hit the blue turf (hard).

Harvard was one of the first schools to offer Trevor Peterson a scholarship prior to his senior season—that should tell you one thing about the 6'3" 225 pounder out of Camino, CA. Watch his recruiting videos (sadly, there are none on youtube that I can embed), and you'll learn everything else you need to know. The fact that Peterson was not recruited by more schools is a minor miracle...but it all worked out to the benefit of the Broncos as they landed one of the more explosive dual threat TEs in the country in February.

Peterson was a first-team All-Conference pick at El Dorado High School all three years that he played there at the varsity level; picking up All-Metro and All-Section honors as a senior. Trevor was also named the 39th best TE prospect in the nation by Scout.com before giving his verbal to the Broncos last July. Peterson's ratings at TE would've no doubt continued to rise if he hadn't been moved to halfback his senior season. Yes, Trevor is a 6'3" 225 pounder who made his name as a tightend, but still made All-Conference after being switched to halfback (he rushed for over 1,000 yards in 10 games). He already has the size and blocking potential of a Richie Brockel, but with the speed of a halfback (Peterson ran kickoffs back as well), and the hands of a wide receiver (964 yards receiving as a junior). Whether he snags #88 or not...you might as well remember the name...Trevor Peterson is the real deal. 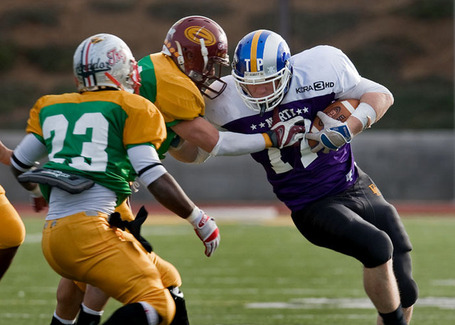