The atomic clock actually says that we have just 90 days until the Ducks hit the blue turf (hard).

Not many recruits over the last few years have generated quite as much buzz as Billy Winn. You wouldn't guess from looking at the oft-bespectacled and meek looking Winn that he fielded scholly offers from about half the Pac-10 coming out of high school. After seeing Winn play last year, I have a much clearer understanding of why Winn was such a hot commodity after playing his prep career at Las Vegas High in Nevada. Heck, just watch Winn run off the field during personnel changes and you'll see why he was so sought after. Winn has the strength, speed and motor to play Defensive End and the frame that begs to play Defensive Tackle. I've said it before and I'll say it again...Billy Winn could be one of the best Defensive Tackles to ever play on the blue by the time all is said and done. How's that for buzz? 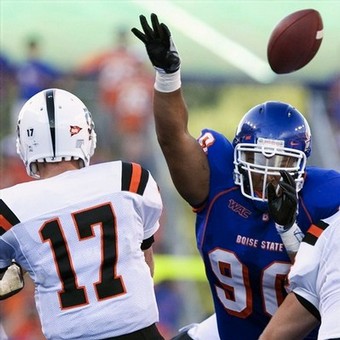 "Scared yet, Russel Hill? I'll have to introduce you to my friend Jeron"

Winn was named Sunrise Defensive Player of the Year as a senior in Las Vegas, as well as first-team All-State and All-Conference. All he did to garner such honors was notch 18 sacks and 3 forced fumbles. Winn's high school accolades did not stop there, however. He was named an East-West All-American and was the lone player to represent Nevada in the East-West All-American Bowl. For good measure, he went 32-4 on the wrestling team...set a Vegas Open weightlifting record in the power clean...threw the discus 171' and ran the 100 in 11.8 seconds (that's about a 4.65 40 time...pro rata). Winn was certainly the best football player in the state of Nevada as a senior...he may have been the best athlete, period.

Winn played in all 13 games for the Broncos last year as a redshirt frosh and handed out 2.5 QB sacks, 26 tackles (5.5 for loss), forced a fumble and broke up two passes. Not only that, but he played Defensive End for the Broncos in the Poinsettia Bowl after injuries seriously depleted the DE depth chart. If Winn himself hadn't gotten banged up in the bowl game (which he played through, BTW), Boise State would've won by 20 points (OK, I can't really back that up)! I don't think it's a stretch to suggest that Billy Winn may be the most versatile, athletic tackle we've fielded in years...and he's just getting started. So, pay close attention when #90 is on the field come Fall—you definitely don't want to miss a minute of this kid's career or what he has planned for an encore.