Some people get excited about vacations or new jobs or the birth of their child.

Me? I'm a sucker for digital player ratings in football video games.

And boy has it been a good week for me. Not only did EA Sports introduce an online Team Builder feature (teams you build can be imported into the NCAA Football 2010 game on PS3, Xbox, and not Wii), it gave us a sneak peak at the roster ratings for every college team in the country, including the Boise State Broncos.

And now I give those ratings to you. You'll have to excuse the inaccuracies and racially ignorant avatars. (Pictures and ratings to follow.)

EA has not said that the rosters available on their Team Builder site are the official rosters that will appear in the game. And good thing, too, because that online roster is a little rough. Here are the ratings for some of Boise State's potential starters and other notables, as best as I can figure.

Not too shabby, right?

The rating everyone will be dissecting is Kellen Moore, considering that he is immortal and all. The game gave him a 93 in throwing accuracy (close enough), an 89 in throwing power (acceptable), 80 in awareness (at least 20 points too low), and a 44 in breaking tackles (probably pretty accurate), for an overall rating of 90. He is listed as wearing jersey number 12, he is an inch taller and seven pounds lighter than his BroncoSports roster size, and he looks like one of the guys from Prison Break. But other than that, great work, EA Sports.

(Also, Colin Kaepernick is a 91, so there's that to be upset about.) 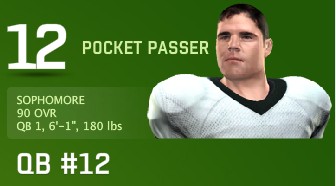 There are plenty more interesting submissions from the EA Sports crew, too. Kyle Wilson is Boise State's highest ranked player at 93 overall. In fact, the Boise State secondary is pretty stacked with Wilson, Thompson, and Jeron Johnson all coming in at 84 or better. The purported weak spot? The paltry 71 from George Iloka (who does not have a flattop but does have a fu manchu).

Also in the seventies (77) is Byron Hout, which means someone at EA Sports is dying tonight. And a 66 for Billy Winn? Was the everglow of former BSU DT Sean Bingham too distracting to the EA research crew? At least Winn has company with Jarrell Root and his 64 rating.

The offense was a little more consistently great with high points going to Moore, Austin Pettis, Titus Young, Jeremy Avery, and African American Richie Brockel. Even the offensive line was solid with four 80s or greater out of the five spots.

Kyle Brotzman was strong (86), Brad Elkin was in the 80s (nepotism!), and  D.J. Harper was nowhere to be found. Help me out here. Anyone recognize this guy?

Perhaps it was Harper. Perhaps it was Jimmy Neutron or Jimmy Barclay from Adventures in Odyssey. There were loads of missing players, ratings for players that don't exist, and little errors here and there. EA Sports still has some wrinkles to iron out, but the bottom line is that the Broncos will be stacked when NCAA Football 10 hits stores in July.

If you want to see the Boise State roster for yourself, go to EA Sports' Team Builder page and search "OBNUG." You're welcome.