The atomic clock actually says that we have just 65 days until the Ducks hit the blue turf (hard).

So, today we'll continue our countdown by briefly highlighting the Bronco player with the jersey number that corresponds with the number of days remaining till the opener.Sorry there isn't a more clear and concise way to explain that.

If you've been in the Boise State football stratosphere  at all over the last 18 months, you've likely heard of Michael "Bacon" Atkinson. If you've been in the vicinity of Boise, ID (or merely flying over) during that same span...chances are you've seen Michael Atkinson. Truth be told, it's hard to miss the mammoth Canuck, who stands 6'0" and weighs in at a healthy 320 lbs. Of course, merely "large" football players have come and gone at Boise State without generating the hype that young Atkinson has...so why is excitement sky-high for the 2008 Defensive Scout Team Player of the Year? Well, simply stated...he's the most athletic big man we've all seen in some time. You just don't see guys that are built like centers move like Atkinson does. He will command double teams and can dance around offensive lines— a pure run stuffing tackle that takes up space and has a good motor. Oh, and he can run too. Yeah, probably what has Bronco Nation abuzz, besides Atkinson's obvious qualities at tackle, is the very real possibility that he'll play some fullback this year...or dare I say, wide receiver.

Possibly the best part of Atkinson's story is how he found himself on the Blue. Big Mike played his prep ball in Windsor, Ontario (Canada) and was a very late addition to the 2008 recruiting class. Atkinson was "discovered" by Boise State coaches who were coveting Atkinson's teammate, DE Tyrone Crawford. They liked what they saw from Atkinson (how could you not?) and offered him a scholly too. Crawford didn't get his academics sorted out swiftly, and the Bronco coaches returned from the Great White North with a very different, but equally exciting talent. And just to tag a fairytale ending onto this fortuitous series of events...the Broncos got Crawford too (after a year of JC ball in the states) and he'll be joining the team for the 2010 season.

Atkinson was a 3-year letterman at Central Catholic High in Windsor where he played defensive tackle and fullback. He was named the WECSSAA Defensive Player of the Year (WECSSAADPOTY, for short) as a senior after piling up 78 tackles, 3 forced fumbles, and 7.5 sacks. That same year, he blocked 4 field goals and 2 punts (!) and, ready for this...rushed for 725 yards and had almost 250 yards receiving. All told, Atkinson rushed for over 1200 yards in his final two years at CCHS...when was the last time you saw, or even heard, of something like that? Atkinson's hype machine has been running at capacity for months and we're a mere 65 days away from seeing if his extremely rare set of skills' coming out party against the Ducks. He should be a great addition to the ever-more-dominant Bronco D-line and between him and Billy Winn, it's hard to imagine teams opting to run many dive plays for the next few seasons. Atkinson will be fun to watch for the next 4 years, so get used to seeing a lot of Bacon 'round these parts. Not that you can miss him. 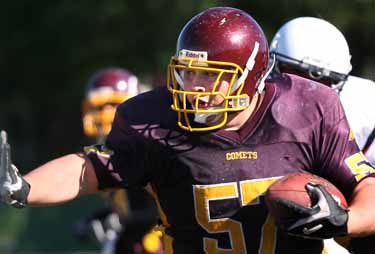 "I'm coming for your souls. And sandwiches."