The atomic clock actually says that we have just 77 days until the Ducks hit the blue turf (hard).

Boise's Bishop Kelly High School has been good to the Broncos as of late. The private Catholic school has produced its fair share of scholarship athletes and walk-ons for Boise State, and almost all have contributed in big ways for the Broncos. Linebackers Colt Brooks and Tim Brady were Knights, so was sorely missed lineman Tad Miller. DB Cedric Febis (by way of the Netherlands) and FB Andy Silsby are also Bishop Kelly products that currently call the Blue home. Now along comes OG Spencer Gerke, who resembles "Mad" Tad Miller in more ways than one—and the Bishop Kelly recruiting pipeline lives on for at least another 4 years.

I wouldn't put too much stock in what the Broncosports.com bio page has to say about Gerke's weight...dollars to donuts Gerke is at least 285 as we speak, and sporting a fierce Irish Beard. It's as if Tad Miller's little bro is walking the sidelines...and I'm starting to get goosebumps about the Bronco O-line again after lackluster (by Bronco standards) 2007 and 2008 campaigns. Gerke was an All-SIC and All-State performer at Bishop Kelly as both an offensive and defensive lineman his senior year. He notched 69 tackles, seven pass break-ups, 2 sacks and an INT from the DE spot and produced more pancakes than an Elks lodge breakfast from the OG slot. Gerke is my wildcard on the O-line this year and I think he'll get significant reps as the season progresses. I wouldn't be surprised to see him an impact player at the position in short order as he appears to have a nasty streak and possesses leadership qualities that coaches covet. Bottom line is this: Boise State has recruited the best players in the state—bar none, and Gerke may be at or near the top of that list. 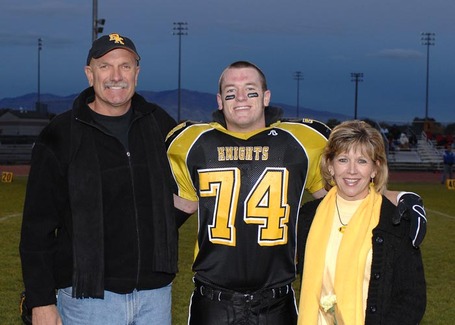