Share All sharing options for: Public enemy #1: The case for Robb Akey

Boise State football's Public Enemy #1 is a coordinated effort by OBNUG to decide which loathsome individual has the distinct privilege of us making fun of him (or her!) all year. Previously: Colin Kaepernick. Today: Robb Akey. Tomorrow: the BCS and John Swofford.

It was a stroke of luck for the University of Idaho that the very same weekend that Dennis ".09" Erickson was gleefully fleeing the Palouse, the Blue Collar Comedy Tour was in town or they may never have found Robb Akey (the extra "b" is for bargain). Imagine it, if the Vandals hadn't come calling, the excitable Akey could be swilling Keystone Light in his backyard or scraping off the bug zapper as we speak. But to my mutual dismay and delight, the braintrust at the "Harvard of the West" looked at their mind-numbing string of disastrous coaching hires and collectively pledged: "the bar can go lower...the bar must go lower".

And with that...it was Akey time.

Robb Akey may be an elaborate hoax for all I know. A sentient mustache may have taken over the body of that guy that teaches Rex Kwon Do and managed to negotiate a $1 million dollar buyout clause (not a joke...he actually has a $1 million buyout clause!). Whoever is pulling the strings...Akey brings balance to the Idaho football universe. You see, he is the Yin to Chris Petersen's Yang (not that I've ever seen Chris Petersen's Yang, mind you). Without the uncharismatic, gaffe-prone Akey...the thoughtful, competent Chris Petersen might not exist—or have reason to. 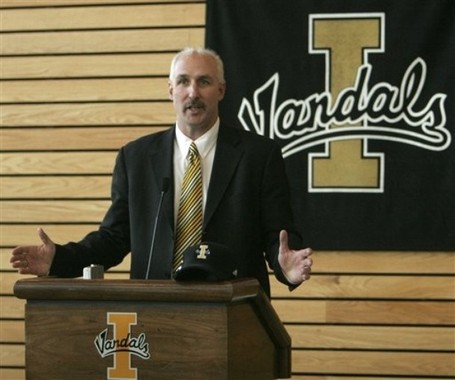 "A fool and his mustache are soon parted"

To put it quite simply, Akey is the perfect foil for our cherubic coach and the perfect coach for our foils. It is because of this, we must hate him. You see, Akey poses no real threat to us in the realm of coaching, and his vain attempts to re-ignite the rivalry between Broncos and Vandals by spewing empty rhetoric are mildly amusing (adorable even). It is his very existence...his mustachioed un-Petersenness that we can not tolerate. He is kinda like the sensei of the Cobra Kai dojo, John Kreese—always fired up, aggressive and baiting his enemies into a fight...but when the fight occurs, his prize pupils get Crane-kicked into next week. Now...I'm sure John Kreese has credentials...he may even know how to properly motivate an unloveable crew of teenage rejects...but he's no Miyagi, he's the anti-Miyagi. So we hate him.

Akey, as long as you wear Vandal black gold silver colors, you are our enemy, and the enemy deserves no mercy.