Share All sharing options for: Public Enemy #1: The case for Colin Kaepernick

Boise State football's Public Enemy #1 is a coordinated effort by OBNUG to decide which loathsome individual has the distinct privilege of us making fun of him (or her!) all year. Today: Colin Kaepernick. Tomorrow: Robb Akey.

He's 6'6" with the body of a sixth grader, a unique offensive weapon that few teams have an answer for, and a prancing runner of a quarterback whose greatest plays are made when he's not actually throwing the ball.

Why do I hate him? Because the only part anyone ever cares about is the middle part.

People gloss over the fact that Kaepernick looks like a giant Elmo doll and throws like the ball should have been there yesterday. They simply love, love, love all that unbridled athleticism. 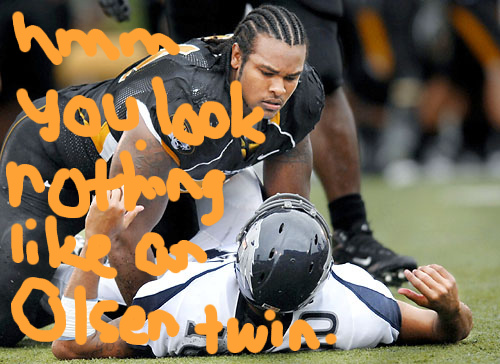 And there is certainly a lot of athleticism to love. Kaepernick has a skill set that is unique to nearly every other college quarterback. In addition to being able to cross a football field in five strides, Kaepernick is quick, elusive, and capable of the big play at any moment. He is dangerous with the ball in his hands (less so when the ball leaves his hands in a vain attempt to reach a receiver) as evidenced by his gaudy statistics: 2849 yards through the air, 1139 yards on the ground, 39 total touchdowns.

Colin Kaepernick is as dynamic a player as there is in the West.

Whether you agree or disagree, this statement really gets at the heart of the Kaepernick paradox: How exactly do you describe him? Note that the above sentence does not call him a quarterback. It does not use an adjective that assumes consistency. It is a broad, general statement that says a lot without saying much at all. 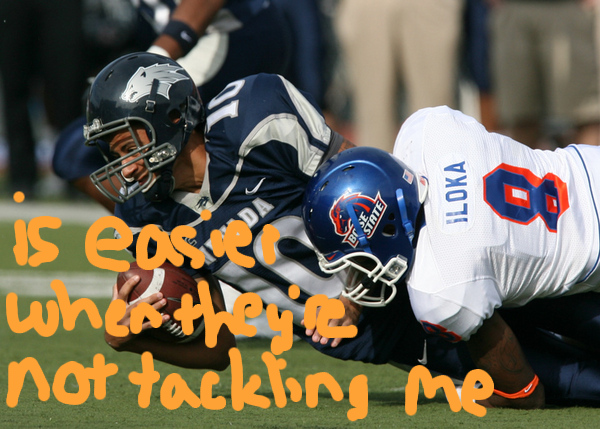 Colin Kaepernick is good by the looks of his statistics and he's noticeable by the looks of his lanky, woman legs. You can't help but think something special's going on there. So if you're anyone with a journalism degree and Internet access, you're declaring him the most "dynamic" player in the West, all the while having no idea what you mean by "dynamic."

This is how over-hyped, overrated players are born.

And what better credentials can you have for being Public Enemy #1 than those of an over-hyped, overrated conference rival? 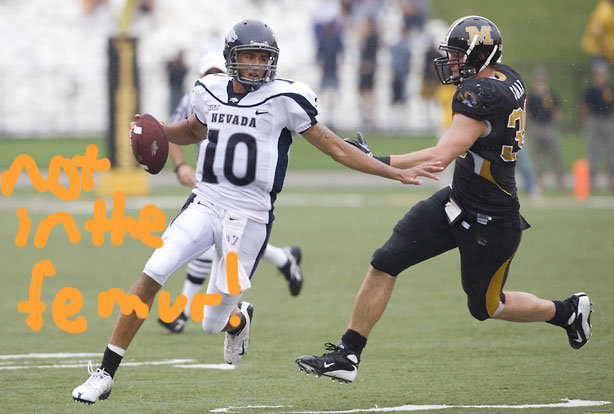 One thing's for sure: I don't fear Kaepernick any more. The kid was terrifying all last offseason and leading up to the Nevada game, but then a funny thing happened. The Bronco defense studded up, Kaepernick went 19-for-50, and the aura of invincibility was gone. When faced with an athletic, disciplined defense, Colin Kaepernick is Diondre Borel but with name recognition.

And I know I'm not alone in feeling this way. 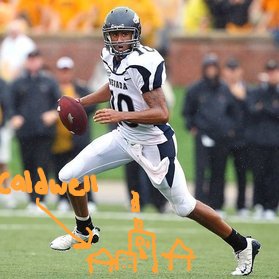 Seeing a human Kaepernick put up Nathan Enderle-type numbers makes it that much harder to hear all the effusive praise that the gawky Kaepernick receives. It makes it insanely difficult to stomach the fact that Kaepernick, and not our beloved Kellsy, was named WAC Offensive Player of the Year. It makes the Vince Young comparisons laughable, the drooling of Sean McDonough ridiculous, and the lionizing from Nevada fans oddly amusing.

Everyone loves them some Colin Kaepernick. But they're only loving the good parts.

There's a whole 'nother gangling, mediocre side that everyone ignores, despite the plaintive cries of Bronco Nation.

He's average at times. He's inconsistent. He's no Kellen Moore. And that's why he gets the nomination for Public Enemy #1.