The atomic clock actually says that we have just 85 days until the Ducks hit the blue turf (hard).

At 6'5" and 250 lbs. you'd think that it would be hard to miss Tommy Gallarda...yet I can only recall one of his career receptions (9-yard TD @ Oregon) and frankly, didn't even realize that he was set to begin his junior year. The hefty Gallarda has indeed been rather quiet thus far in his Bronco career, amassing all of 84 receiving yards and 2 TDs. Could 2009 finally be the year that Gallarda makes his rather large presence known? Here's to hoping.

Gallarda came to the Broncos from the familiar recruiting turf of Brea, California (Alex Guerrero's alma mater) and was one of the first big recruiting "wins" of the Chris Petersen era as he spurned the University of Colorado and Dan Hawkins in favor of the Broncos in February of 2006. Gallarda was an All-League performer on offense and defense at Brea Olinda High and finished his senior campaign with 810 yards receiving and 11 TDs despite playing in only 8 games due to an ankle injury. Gallarda was also named the Sunset League Defensive MVP in his tenure with the wildcats...racking up 120 tackles and 6 sacks in his final two seasons at linebacker for the Wildcats. This year, Gallarda's height should help place him alongside other lanky go-to men Austin Pettis and Chandler Koch in the Kellen Moore corner fade-route rolodex. Gallarda's the biggest tightend we've got right now so hopefully in 2009, his game will match his frame (unintentional rhyme...ba-zing!) and make Bronco Nation (and defenses) start to pay closer attention. 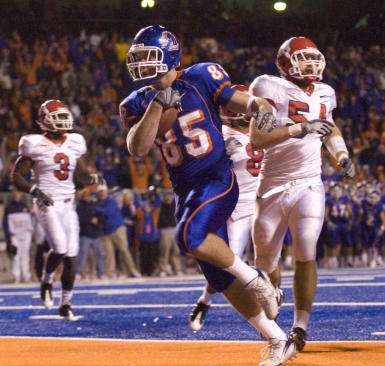 For the life of me, I can't remember this happening