The college football world is abuzz with news on the BCS bowl pairings, none more so than that of Boise State versus TCU. What's your take on the matchup of the Broncos and the Horned Frogs in January 4's Fiesta Bowl?

After the jump, find out what the local and national media are saying, and let me know in the comments who you agree with. The good news is that Boise State is going to a BCS bowl. The rest of the news seems to be up for interpretation. 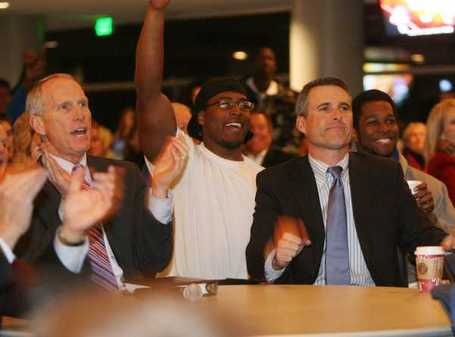 Chris Petersen and Gene Bleymaier react to news that "He went to Jared." (via media.idahostatesman.com)

This morning, I checked my email inbox in hopes of an Amazon confirmation, and instead I was reminded of the reality of my favorite college football team.

You guys got the shaft. Wow, What a pathetic cop out by the BCS...

I'm glad I get to see the poinsettia bowl from last year again... wait...

And oh, there's my Amazon confirmation. Turns out they sent my package to my old address where it will face off against last year's Christmas gift in a battle that will determine nothing. And I'll be out a present this year.

Still, the Fiesta Bowl folks couldn't turn down a matchup of undefeated teams. And instead of the feeling that the game is hampering non-BCS teams' claims for a national title, CEO John Junker said it will in fact benefit them.

"We see it as taking a large chunk out of the glass ceiling," he said Sunday.

Really? How thick is that glass ceiling?

Southorn's new partner in IPT crime, editor Tom Fox, weighed in with his take on the BCS matchup in a piece entitled "BCS not perfect, but seems to work." Fox then went on to describe neither the BCS's imperfections nor the ways in which it works.

"I think it's good for college football, and I think it's an exciting time," Boise State coach Chris Petersen said. "We've been saying the whole time, 'the system's not perfect.' I think everybody knows that, but we're making progress and trying to get it right."

Boise State is not going to complain about the match up or returning to the same BCS bowl. They are just happy they were offered a chair this time around.

Much of Fox's column studied the lengths to which Boise State administrators and the WAC's PR firm went to in order to land Boise State a BCS berth. How influential do you think any of those tactics ended up being? I seem to think that the only reason Boise State made a BCS bowl was because there were so few one-loss teams and because Nebraska couldn't hold a lead against Texas. Was that the more important factor?

Hated it. That was my first reaction to pairing Boise State and TCU in the Fiesta Bowl. Hated making two non-BCS-conference teams square off. Hated that neither program would get a chance to knock off one of the BCS big boys, like Florida.

Hated it. No questions asked.

But not long after, Murphy was drinking the Kool-Aid.

I've got to hand it to the Fiesta Bowl. They treated the Horned Frogs and Broncos just like any other team, opting to put together the best matchup and ignoring the programs' small alumni bases and newcomer status.

In other words, they treated them as equals, which is all the non-BCS teams and their fans ever wanted.

One other interesting quote from Murphy's story came from Fiesta Bowl CEO Junker, who responded to allegations of collusion and martyring his bowl for the greater good of the BCS.

"I'm attempting to be a gentleman, but that's the biggest load of crap I've heard in my life," Fiesta Bowl CEO John Junker said Sunday, dismissing the suggestion.

"We don't do the bidding of somebody else to our detriment."

He went on to add: "We are perfectly capable of bidding to our own detriment, thankyouverymuch."

The first sentence on the AP Fiesta Bowl recap pretty much sums up how the country is viewing this game.

Not cool, AP-lede-writing-machine. Not cool.

Matt Hinton of Yahoo's Dr. Saturday blog can always be counted on for a rational reaction to college football's biggest stories. Case in point:

The title game was always basically out of reach for Boise and TCU (if Nebraska had held on to beat Texas on Saturday night, Cincinnati would have gone on to Pasadena instead, not the Frogs), but pitting them head-to-head means they don't even get their requisite shot at an Oklahoma or Alabama to make their case. They get the Poinsettia Bowl Deluxe, where the only possible statement either can make to the nation is to inflict an unwatchable blowout on the other.

Hinton ended his story with Fiesta Bowl analysis that I am pretty sure Mark May will use at some point during this bowl season:

Aw, way to go, you guys! I bet you're going to fly out here all by yourselves!

Hinton even had a smooth dig on the BCS prior to the announcement of the pairings. How could he have known that the BCS would fail once again? Is he clairvoyant?

... Any system that culls the field to two contenders by means other than actual football has no business calling itself a "championship." For at least the ninth time its 12-year life, the BCS can't possibly fulfill its mission of matching the top two teams head-to-head because it automatically excludes most of the qualified applicants.

Cory McCartney, an SI writer I had not heard of until this morning, is so disappointed at the Fiesta Bowl pairing that he is resorting to movie references. Animal House? Is that the one with Will Ferrell and Vince Vaughn?

I'm reminded of the opening scene of Animal House, when Kent Dorfman and Larry Kroger knocked on the door of Omega Theta Pi during rush. After being quickly paraded around and given a glimpse of all the beautiful people, they're summarily banished to sit on the couch with Mohammet, Jugdish, Sidney and Clayton, a motley crew deemed more on their level.

McCartney's follow-up to the analogy is also an eloquent take on the situation.

Should TCU, ranked third in the final BCS standings, have played fellow unbeaten Cincinnati or Florida, which spent 12 weeks ranked No. 1, and won handily, it could have made a case for a share of the national title in the AP poll, which isn't contractually obligated to crown the winner of the BCS Championship Game. But instead, we have a rematch of the 2008 Poinsettia Bowl, only with a much more lucrative payday -- and just like last year's Poinsettia Bowl, it offers no tangible reward, because no matter what Boise State and TCU do in that game, it will be met with, "Yes, you went undefeated and won a BCS game, but look who you played."

Spencer Hall at EDSBS needed no words to capture his take on the BSU-TCU matchup. 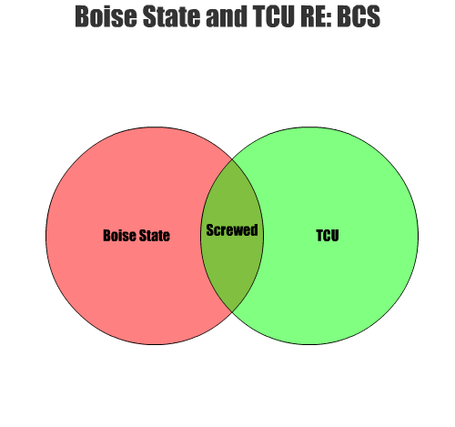 The New York Times' Pete Thamel might be the first to bring up how the Fiesta Bowl will impact the rankings for both teams next year.

What exactly can they prove by playing? We’ll find out on Jan. 4. But the sad part is, Patterson is already worried about next year.

"We’re trying to set ourselves up where you can start higher in the rankings," he said. "One of the things that probably hurt us this year, we ended up No. 7 in the B.C.S. and started No. 17."

Stewart Mandel from SI.com is one writer who is on board with the Fiesta Bowl's decision.

I never thought I'd say this, but it seems the BCS suddenly has more respect for non-BCS teams than much of the general public. ...

Have you guys not looked at the latest rankings? TCU is fourth. Boise State is sixth. Both are undefeated. Why would they better prove themselves by beating their originally projected opponents, Georgia Tech and Iowa -- both of which are lower ranked and sport two losses apiece -- than by beating each other?

And to wrap it up, here is a handful of other stories concerning the topic

What do you think about the reaction around the country? Do you buy the arguments that Brian Murphy and Stewart Mandel make? Are you convinced by Fiesta Bowl CEO John Junker's statements? Share your thoughts in the comments, and if you run into any other BCS-related links worth sharing, add them below or turn them into a FanShot.