Where will Boise State end up in the BCS picture? We'll know in the next 30 minutes as FOX's BCS selection show is about to begin.  Comment along through the selection show, and catch OBNUG's wrap-up post going live once the announcement is made.

Further poll analysis after the jump and in the comments. 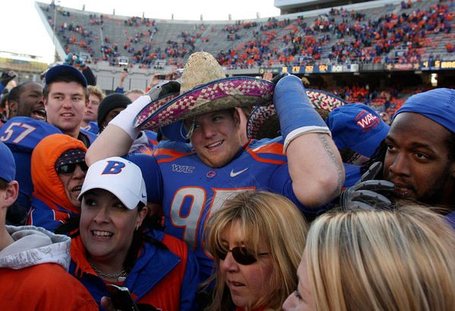 How do you spell perfection? B O I S E  S T A T E. Boise State demolished a down and out New Mexico team, but unfortunately for some they didn't beat the monstrous spread.  So with that victory capping off the second undefeated regular season, was it enough to put the Broncos in another BCS Bowl game? We'll have to wait until tonight to find out. Here's a recap of the game.

Seriously Mark May... Seriously??? I think that I have seen that somewhere before... oh yeah the Poinsettia Bowl LAST YEAR! Not to mention the fact that part of the honor of "crashing" the BCS is to be able to show that you can hang with the "big dogs". It would be an insult to both teams to force them to play each other!

Florida mailed in their resume for the National Championship Game, then found out it got lost in the mail. I guess that's what happens when you start believing the hype. I can't say that I feel bad for the Gators though. They weren't exactly stellar this season. They lost a  lot of talent at key positions and that became more and more apparent as the season wore on. Alabama on the other hand did not want to face another Mtn. West team again. The irony is that Texas nearly made that very thing happen.  The thing that I am trying to figure out is, why if Nebraska is that good, did they lose three games this season? I guess that question is more rhetorical than anything. The real question is: Is Texas the best candidate to face Alabama in the National Championship Game? TCU would make an interesting opponent and could very well knock off Alabama, the only thing holding them back is that blasted "non-AQ" moniker that they wear. Something that I have noticed over the past several weeks is that there is even bias among the actual "AQ" conferences. Cincinnati is undefeated and has beaten several other "AQ" teams, but it seems to me that they are held in the same regard with Boise State and TCU. So, is it really all about the BCS or just the SEC and Big 12 with a sprinkling of PAC 10 when USC is relevant? I guess the real answer is one simple word... MONEY.

Outside of the top six teams, most everyone else was idle. A few other games of note. Oregon wins the PAC 10! Boise State beat Oregon, so is Boise State really PAC 10 Champs? Seriously though, good for them and thanks for giving Boise State's SOS a much needed boost! Clemson lost a heart breaker to Georgia Tech, who gets to carry the ACC torch into the Orange Bowl. USC has developed a new nasty habit this season. Losing. That is something that they have not had to deal a lot with over the last few years. Will they be back next year? At least they have their tradition to fall back on, that will be the key to them still being ranked at the end of the season, even though  two of their losses came from unranked teams. Speaking of one of those teams, Washington beat killed Cal. Think we'll see Washington crack the top 25 in order to justify keeping USC in there? And finally Houston, the Fresno of C-USA. They beat the BCS teams, then fail to win in-conference games. They were fun, they will be missed.

Meanwhile in the WAC...

Fresno State, in Fresno fashion manages to beat the BCS team with a miracle two point conversion! Here is link to the highlights of that game, cuz it was that good! La Tech showed SJSU who was boss with a 55-20 win. We all know what happened to NMSU. And Hawaii really, really wanted a chance to play June Jones coached SMU in the Hawaii Bowl. One problem though, Wisconsin. 51 Points later, Hawaii will just have to settle with going to the Hawaii Bowl as fans. I wonder if they will root for SMU?

On to the Polls!

(links will be updated as the polls are released.)

Boise State vs. TCU in the Fiesta Bowl