Sam runs the always-informative BleedCrimson.net, and he took the time to answer a few questions about tomorrow's Aggie-Bronco matchup. After the jump, take a look at where the Aggies might be five years from now and discover why Bronco fans should never take offensive coordinator Bryan Harsin for granted again. The Predict the Score post will be up in a bit. For now, enjoy the interview. 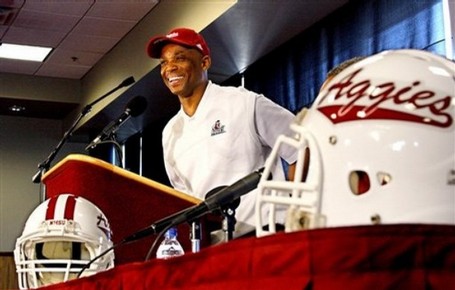 What are your impressions of the DeWayne Walker era so far? Is it better or worse than the Hal Mumme era?

So far my impression of the DeWayne Walker era is positive. It's always hard to tell with first year coaches. Based strictly on record, it's already a lot better with the Aggies going 3-9, versus 0-12. Plus a win over rival New Mexico (no matter how bad they are) always makes a down year a little easier to stomach.

The attitude of the team is different. They want to go out and punch you in the mouth. Unfortunately, they just don't have the talent this year to do that. One of Coach Walker's mantras coming into the season was that the team wasn't going to get beat in the 4th quarter like in years past and that's been mostly true. The team has only been outscored by 13 points in the 4th quarter and has two 4th quarter come-from-behind wins.

Where do you see the New Mexico State football program in three years? Five years? How far away are the Aggies from competing at the top of the WAC?

In three years I can see the Aggie football program competing to go to a bowl every season. In five years I see the Aggies challenging for their first conference title since the 60s. As far as competing at the top of the WAC on a consistent basis? I think the Aggies are 5 to 7 years away from that, considering that Boise State, Fresno State and Nevada have at least that much of a head start on the Aggies.

The biggest factor to the Aggies potential success will be keeping the same head coach. The Aggies will be hard pressed to keep DeWayne Walker if he starts having success. Bigger programs will come calling and with his pedigree combined with a potential turnaround at one of Division I's most barren programs, it will be tough to keep him in Las Cruces.

What is the general mood of the Aggie fanbase entering this weekend's game with the Broncos? Resignation? Hopefulness? Lowered expectations?

I think the mood ranges greatly on who you talk to. The casual fans probably dismissed football season as soon as basketball season started, the diehard fans are probably disappointed. I felt that Aggie fans should be happy if the team finished 4-9. If we finished 4-9 I'd be ecstatic.

Does it bother you that a lot of Bronco fans are already looking ahead to bowl season? If Bronco players are doing the same, do you think that NMSU could steal one from Boise State?

Not really because I'm looking ahead to bowl season, too. I love bowl games and bowl pick 'em (although I do think there are too many bowls).

It might bother me if the Aggies were heading into the Boise State game on a roll and had a reason to feel slighted. Yes, anyone can beat anyone on any given Saturday, Friday (or any other day the WAC decides it should play football). Unfortunately, there's not much of a chance for the Aggies to steal one from Boise State, not with an offense that only averages 11.8 points per game.

Plus, the scores of recent BSU/Aggie games do not give me a happy-happy-joy-joy optimistic feeling. We've been beaten badly with more talented teams three out of the last four years, 56-6, 58-0 and 49-0 (oddly enough, BSU's Fiesta Bowl season was the one year we were competitive, 40-28).

What do the Aggies do well on defense?

The Aggies have been relatively strong at forcing turnovers with 23 on the season and they have returned a couple turnovers for touchdowns. 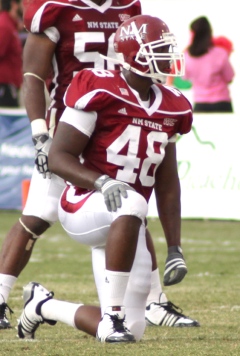 What defensive players have been pleasant surprises this year?

Our two interior linemen Pierre Fils and Donte Savage have been a nice surprise this season. They've got 52 and 49 total tackles respectively and combined they have 18.5 of the Aggies tackles for loss and 13 of the Aggies' 21 sacks and three of the Aggies' fumble recoveries.

New Mexico State's offense: yuk. How hard is it to throw for only 91 yards per game? Does that stat alone make you long for the Air Raid offense?

Actually it's not that hard to only throw for 91 yards, we're doing it on a weekly basis (joking!). It shouldn't come as much of a surprise to anyone that watched the spring game and fall camp. The Aggies struggled throwing the ball in both of those settings (and if I remember correctly, Coach Walker blamed the spring game's bad passing performance on the wind).

I think the personnel/ability moreso than the scheme are what's keeping the Aggies from throwing the ball more effectively (ranging from the QBs to the WRs, the O-Line gets a pass on this one, they've been pretty good at protecting the passer this season). The general M.O. for offensive coordinator Timm Rosenbach this season has been throw the ball a few times in the first quarter until one of the quarterbacks get intercepted and then after that throw out the passing half of the playbook and run, run, run, run, run until the game is over. But again, I think it's more of a personnel issue than a scheme issue at this point.

Think Seth Smith will be able to top 1,000 yards on the season this week?

I think he can do it. He needs 98 yards and the Aggies are going to try to make this game go as quickly as possible and that means running it at every opportunity possible.

What has to go right for the Aggies to pull the upset on Saturday?

Everything. Literally everything. Every single bounce of the football, every officiating call, everything has to go the Aggies' way for a chance at an upset. It wouldn't hurt if Kellen Moore suddenly went colorblind and started throwing to the guys in the white either.

I keep telling myself that DeWayne Walker is the reason UCLA beat USC 13-9 back in 2006 and that an Aggie upset over Boise State could happen. Unfortunately Coach Pete is too good a coach to let his team look past the Aggies.