Chris Dufresne may be the only sportswriter in America picking the Boise State Broncos to win the Fiesta Bowl, and for that, he is forever a friend of OBNUG.

Dufresne has spent much of the college football season backing the Broncos, which is increasingly becoming the exception, rather than the rule. After the jump, read Dufresne's take on Boise State, college football, and the playoff debate, and enjoy some insight from one of college football media's best.

What led you to be a sportswriter at the LA Times? Where did you go to school? What inspired you to be a journalist? How did you find yourself in LA?

I wasn't very good at science and math but did pretty well in English, and I loved sports, so this seemed like a profession I could get interested in. Newspapers were in my blood. My dad drove a truck for the L.A. Times for 37 years, and I got my first paper route when I was 10. I later delivered the Orange County register and worked on the high school paper, but not in sports. We did more humor, sophomoric high school stuff like making fun of teachers and such.

I was inspired by several people. One of my best friend's older brothers was a sports writer for the local paper and then for the OC Register, and I thought it was cool he could get into Angels' games for free. I was born and raised in Los Angeles, so I grew up reading Jim Murray, the greatest sports writer of all time in my opinion. That was plenty of inspiration right there.

How long have you been covering college football? Is it your favorite sport?

I started covering colleges full time in 1995, taking over for a guy who left for the Chicago Tribune. It wasn't my favorite sport at the time. I spent years covering the NFL, the Rams and Raiders, but once I started doing colleges I never wanted to go back to the pros.

What is your best college football memory, game, or moment. Were you there?

Wow. Plenty of great games. Before I was on the beat full time, I was lucky enough to cover the famous Boston College-Miami game in 1984 where Doug Flutie heaved that famous pass. I was standing in the end zone when the ball landed and BC players stormed the end zone and picked me and other writers up in celebration. What a moment.

The best game I covered though was probably USC-Texas for the national title, the 41-38 finish...From start to finish, that was incredible.

You have been extremely supportive of Boise State football all season long, much more so than most other college football writers. Why do you feel so strongly about Boise State's place among the elite teams in the countrY?

I've always like the underdogs, although Boise State doesn't really belong in that conversation any more. They're a legit big-10 program. I liked Boise when Dan Hawkins was there, and when they won the Fiesta Bowl berth it was exciting because Ian Johnson was a local kid from Damien High who played on the same team as my nephew.

Jnco jeans not pictured (via l.yimg.com)

Have you met much opposition to your point of view? Have you found that the sportswriting culture as a whole makes it a point not to give teams like the Broncos too much credit?

I think Boise State is getting credit now. The biggest problem people have with them is the conference, and it's a real argument. Could Boise State go undefeated in the SEC or Pac-10, having to face that opposition every week? I don't know. I know Boise State, on any given day, can line up and play with anybody--as the Broncos showed against Oklahoma.

I don't get concerned with what other people say about what I write. I'm pretty independent.

What do you think keeps people from being as supportive of Boise State as you are? Is it the continued success (a la the Cowboys or Yankees)? Is it the combination of soft scheduling and high rankings? Is it the blue field?

It's funny about the blue field. I got a letter from someone this year saying it was unfair for Boise State to wear blue uniforms on a blue field. Can you believe it? So people do have a thing about that field, although I love it.

Chris Dufresne on the Fiesta Bowl

In your bowl prediction article, it was interesting to note your methodology for picks, which essentially came down to choosing against teams that might feel they belong in better bowls. Was this one of the reasons you picked Boise State over TCU? What other factors do you think might contribute to a Boise State win?

Yes, although my theory is taking a beating this year! I think Boise State is motivated after losing to TCU last year, yes, although I think TCU is really good....

What was your reaction to the Boise State - TCU pairing? Do you think that Bronco fans have a right to be upset? Do TCU fans? Or should we all be grateful that we get a BCS bowl in the first place?

I didn't like the pairing at first, but now I'm OK with it. I probably would not be covering the Fiesta Bowl had it been TCU vs. Cincinnati. I think there is national interest in this game. I think it came down to economics. The Fiesta thought more people would travel from Boise than from Cincy. Plus, they didn't like the idea of Cincy Coach being a lame duck or interim if he went to Notre Dame, which he did. 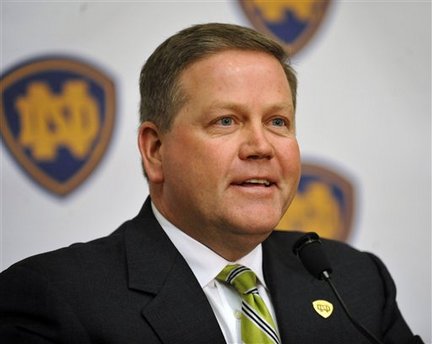 How do you think the Fiesta Bowl will do with the TV audience? Do you feel that there is enough national interest to make it must-see TV?

I think a lot of people will watch this game. I am very interested in it.

College football has the best regular season in sports. The bowls are mostly great, although there are too many. A playoff might hurt the structure of the bowl system, which would not be good in my opinion.

Are you pro-playoffs? If so, what type of playoff system would you propose? If not, would you make any changes to the current bowl system?

Im not pro or anti playoff. I like the BCS because it gives me a lot to write about because it's controversial. I don't think a 16-team playoff would work very well with the bowls. I wouldn't mind seeing an extra game, the plus one that has been talked about. That would add another layer to the system but still wouldn't solve all the problems..

Lightning round. Just a few quick questions so we can get to know you better.