WAC All-Decade Team: Dinwiddie, Moore, or Brennan: How will you vote?

Share All sharing options for: WAC All-Decade Team: Dinwiddie, Moore, or Brennan: How will you vote?

The conference is holding an All-Decade vote-off on its website, letting fans pick the best players at each position from the past 10 years. Who will get your votes? What positions are the toughest to call? Join me after the jump for a look at some of the closest races, and we'll take the debate to the comments and see if we can't figure this thing out.

A quick note before we get started: The WAC automatically generated its list of nominees based on players who earned first- or second-team All-WAC honors at least twice and who were still playing WAC football during the year 2000. The year 2000, Conan? That's right, David Duchovny.

Without further ado, here are the positions that I am having the most trouble with. Please help me.

Quarterback is going to be the most notable position on this All-Decade team, especially if Jared Zabransky can get that PF Chang's grassroots campaign going. The four biggest names on the list make for an interesting debate about who was the best quarterback of the past 10 years.

In my opinion, the favorites are Ryan Dinwiddie, Boise State's most accomplished quarterback of all-time; Kellen Moore, Boise State's future most accomplished quarterback of all-time; David Carr, No. 1 overall pick in the NFL Draft; and Colt Brennan, prolific college passer and Honolulu wax museum feature. Karl Benson, their WAC accolades if you will:

How do you think the QB race will shake down? The race most likely will come down to Dinwiddie and Brennan as one is the most successful WAC quarterback of the decade and the other is the most recognizable. Will productivity or popularity win out?

My deciding factor: Dinwiddie won WAC championships. Brennan did not. That should account for something. 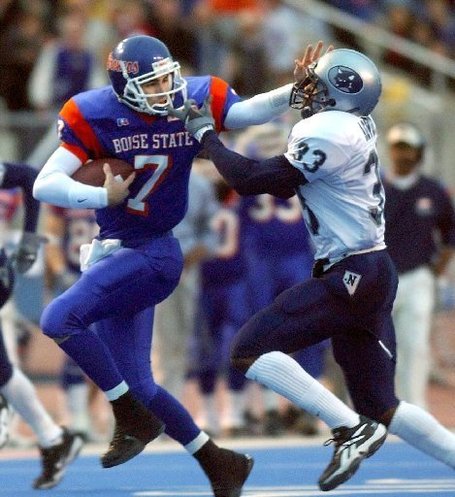 Etcetera: Will Jared Zabransky get any votes? Anyone surprised at how well Kellen Moore holds up against players who have played an entire career in the WAC?

WAC All-Decade Running Back: What do you do with LaDainian Tomlinson?

a.k.a. The One Where You Vote For Ian Johnson

Climb aboard the way-back machine for this category, destination: anonymity.

Howard Jackson? Deonce Whitaker? The immortal Joe Smith? What conference have I been watching for the past 10 years?

A lot of votes will undoubtedly go LaDainian Tomlinson's as voters go "Hey, he's in my ESPN the Magazine" when they see his name. But is one year of 21st century WAC domination enough? For me, it is not, but I am open to any arguments that say otherwise.

Out of the whole list, there are only three POY winners: Tomlinson, Ryan Moats, and Brock Forsey. Moats and Forsey are definitely in the running for me, but I think you also have to consider Ian Johnson (three-time All-WAC performer) and Vai Taua (the face of Nevada's new rushing attack).

If I'm picking one back, it is Brock Forsey. If I'm picking two (and I am because the WAC lets me), it is Forsey and Moats. Would you put Ian Johnson on your All-Decade team?

WAC All-Decade Wide Receivers: Do any Broncos make the cut?

Two Broncos make the roster of All-Decade nominees. Are either Jeremy Childs or Austin Pettis worthy of a spot?

The competition at WR is intense with the likes of Bernard Berrian, Davone Bess, Kevin Jurovich, Ashley Lelie, and Chris Williams. Any one of those players could make the final three. Do Childs and Pettis fit with them?

Add one season to either player's resume, and I think the answer is easy. However, since Childs left early for the pros and Pettis still has time left at Boise State, their careers are not as complete as other WAC receivers. Was Childs the best receiver in the conference during his stay with the Broncos? I'd say yes. Is Pettis the best receiver in the conference right now? Absolutely. Are either good enough to make the All-Decade team? What do you think?

WAC All-Decade Offensive Line: If you had to choose between Daryn Colledge and Ryan Clady ...

Fat guys have their day in the sun

There are a lot of big names on the nominee list for offensive linemen, and the fact that the WAC lets you vote for five big uglies makes stuffing your ballot with Broncos a little easier.

But let's say you had to choose between the two Broncos on the list. Would you take Daryn Colledge or Ryan Clady? And why?

Colledge was the self-made Bronco lineman who was an All-WAC player three years running. Clady was the prototypical NFL tackle who earned two first-team awards then left early for the NFL. Does Colledge's four-year success trump Clady's brief brilliance?

For the record, I voted for both, but if I had to choose only one for the All-Decade team, I think I'd lean toward Colledge.

WAC All-Decade Defensive Backs: If Quintin Mikell doesn't make this, I am not responsible for what happens to Karl Benson

Is this where I vote for Marty Tadman?

Mikell is the only player in the secondary to win POY honors, and his two trips to the first-team (plus his success at the pro level) should make him a shoo-in. Will any other Broncos join him?

Kyle Wilson is up for nomination along with Jeron Johnson, Gabe Franklin, and Marty Tadman. Franklin, Tadman, and Wilson all made three All-WAC teams, a feat only matched one other time by a secondary player (UTEP's D.J. Walker). The Broncos should be well-represented in this category. But how well-represented? Is three players too much to ask?

How will you be voting with the WAC's All-Decade Team? Are you putting down Dinwiddie's name? Where will Ian Johnson be on your ballot? Is Korey Hall a no-brainer? Share your thoughts in the comments.