Share All sharing options for: Game balls for Boise State vs. Louisiana Tech

The Broncos escaped Ruston with a win on Friday night, pushing their record to a perfect 9-0. It was neither easy nor pretty at times, but Boise State found a way. After the jump, I'll name some of the best players and plays from the game. Feel free to add yours in the comments.

Readers' choice award for player of the game 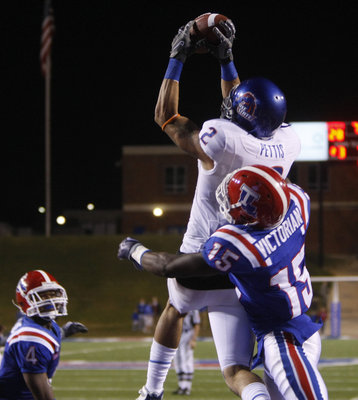 Has Pettis been the Broncos' most important offensive player this season? Take away Kellen Moore, and I think the decision is an easy one. Pettis was huge again versus the Bulldogs, recording a team-high nine catches to go with 105 yards and the winning touchdown. What a grab, too, on that winning score. Pettis snatched a Kellen Moore bullet out of the air, with a man on his back, and brought it down for six. Pettis has scored at least one touchdown in each of the Broncos' games this year, but more importantly, he has been dependable, clutch, and downright uncoverable at key times all season.

The Jeremy Avery run of the night 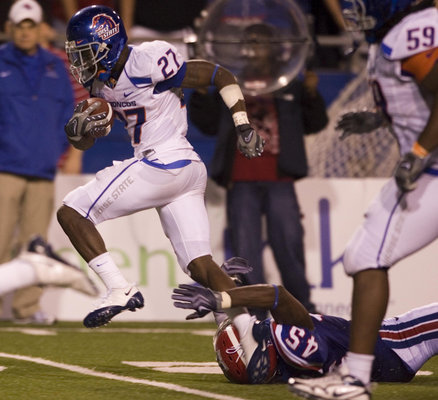 Following Pettis' TD, Boise State answered with a long overdue long gain on the ground. Jeremy Avery took a pitch left, avoided the wake of Chris Potter and Richie Brockel blocks (thanks to ty_ol for the ID on Potter), and scooted his way into the end zone for the 44-yard score. The play was remarkable in its uniqueness. All game long Boise State had done very little on the ground and Avery had made very few tacklers miss. On this one play, Avery wasn't bothered until he was 10 or 15 yards downfield at which point he juked free of a tackler and shook off another on his way to the end zone. Where did that run come from? And how can we get some of that in the first half of the next few games? 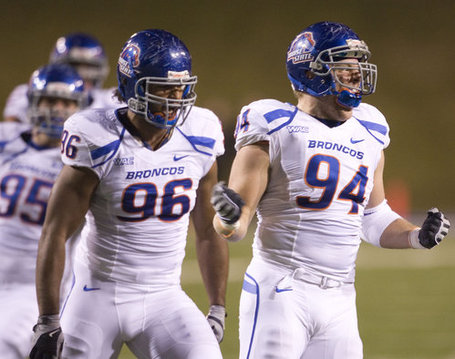 Hout seems to be returning to his pesky form of 2008, totaling five tackles and a sack on Friday night. For the first time all season, Hout has put together solid back-to-back games and he seems to be hitting his stride at just the right time. Still, I think if he gets through the entire season without a fumble return involving a spin move, I think we'll all be a little disappointed.

Really? He had 12 tackles? award

After watching the game, I thought Jeron Johnson had a quiet night. Anybody else think the same? Turns out, Johnson had one of the most productive nights for a Bronco defender yet this season, leading the team in tackles with 12. He didn't make any flashy plays like INTs or spontaneous Russel Hill combustions, but at the same time, he didn't whiff on any tackles or blow any coverages. Johnson was disciplined and effective. I'm okay with that.

I would be remiss if I didn't mention Kellen Moore's performance: 28-for-41, 354 yards, three TDs. Just another day at the office for Moore, which is quite amazing considering how many teams would kill for QB numbers like that. 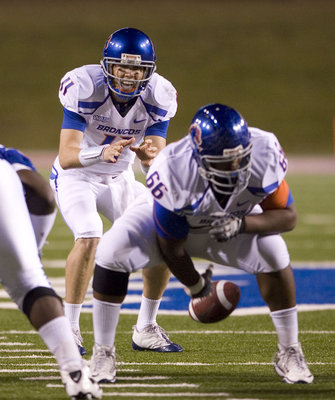 Once again, the voodoo of the South put the fear of God in the Broncos. What began as a blowout dwindled down to a nailbiter in the fourth quarter. What is it about Ruston? And considering the blowout win at Hawaii earlier this year, has Ruston replaced Honolulu as the new nemesis for Bronco road venues?

Special teams play of the night

Perfect timing and perfect execution. Aren't I supposed to be saying that about Boise State's special teams?

Though Boise State has played in several close games this season, I have never really fathomed the reality of a loss until a dire moment in the fourth quarter of Friday's game at LaTech. The Broncos were clinging to a 2-point lead following 14 unanswered points by the Bulldogs. Boise State drove to the Louisiana Tech 14-yard-line where the drive stalled. Kyle Brotzman came on and missed a 31-yard field goal.

The combination of Boise State's red zone troubles and Kyle Brotzman's kicking troubles suddenly became very real to me. Points were not a given any more. And that terrified me. Fortunately, the Bronco defense stiffened (barely) on the next drive, the Bulldogs punted, Kellen Moore completed a TD pass to Pettis, and I started feeling much better. But don't you ever scare me like that again, Broncos.

The Dick Tomey award for needlessly aggressive coaching decision: Coach Pete. Going for two with an eight-point lead is not by the book, and Coach Pete knows it.

Worst time to insert a freshman QB for game experience: Against Boise State. LaTech's Colby Cameron had the deer-in-the-headlights look, followed predictably by the deer-getting-run-over-by-a-tractor-trailer look.

Best made-up penalty: Striking blow. Not only was the penalty ambiguous and imaginary, it kept a LaTech drive alive and resulted in a touchdown. Oh, those nutty WAC refs. Always coming up with new ways to disappoint and frustrate.