The Bronco fans' guide to the BSU-Oregon ranking debate

Share All sharing options for: The Bronco fans' guide to the BSU-Oregon ranking debate

The issue we least thought to haunt us this season has reared its ugly head. We beat a team, surely that should settle that debate. Well, it hasn't.

People are getting themselves worked up into a tizzy over the supposed superiority of Oregon over Boise State. Somehow playing out hypothetical rematches in their heads now trumps what was settled on the field two months ago. Luckily, Boise State has remained ahead of Oregon in the human polls. Unfortunately, every single computer poll has Oregon ranked higher. This has worked itself out into Boise State receiving a computer poll average ranking of 8 while Oregon is at 7. If this were flopped, Boise State would be much closer to TCU in the BCS rankings.

Join me after the jump for a list of the most common reasons Oregon lost to Boise State and why they should be ranked higher at this point in the season.

Now, I haven't seen this excuse from most media members, definitely not like last year's Joe Giansante "Super Bowll" debacle, but I have seen it implied by some Oregon fans.

Now, I'll agree that this game meant more in the fact that if Boise State loses that game, their BCS chances are through. Oregon can still win the PAC 10 and make a BCS game. The risk/reward was definitely skewed more for Boise State.

However, the implication I seem to be seeing is that Boise State put everything into this game and pulled out all the stops. Last year we had to deal with the excuses of Oregon being down to their 5th string QB. This year both teams entered the game fully healthy, both teams had the entire offseason to prepare and the motivation was there for both teams after the trash talking in the media.

This game might have meant more to Boise State's BCS chances, but the motivation was definitely there for Oregon to win this game. It was not just another non conference game for the Ducks.

2a. It was the first game of the season
2b. Oregon's timing was off

Another favorite excuse I've been seeing is that Oregon just hadn't gelled yet. They run a very complicated spread offense that is predicated on timing and Oregon just was not in sync yet.

This seems silly to me. Oregon was rolling by the end of last year. Masoli was healthy. The spread offense was clicking. All we heard was how Boise State was going to have issues containing it. I'm no expert in the spread offense but Oregon returned Masoli at QB, Blount at RB and Ed Dickson at TE. That's a pretty good trio at the skill positions. Not sure how this timing was magically lost in the offseason.

On the other hand, Boise State was surely not in midseason form that first game (unless you count the botched snaps). Brotzman missed two field goals. Boise State's red zone offense stalled. They easily left 10 points on the field. The final score should have been a lot more than what it was.

But Boise State's offense wasn't the story of this game. It was their defense. Oregon didn't have a single first down in the first half. Oregon only converted one third down the whole game. Oregon had 31 rushing yards and Blount contributed -5. Boise State's defense dominated this game. Everyone who wrote about the game and could overlook the punch noted this. It wasn't close. But that was two months ago. 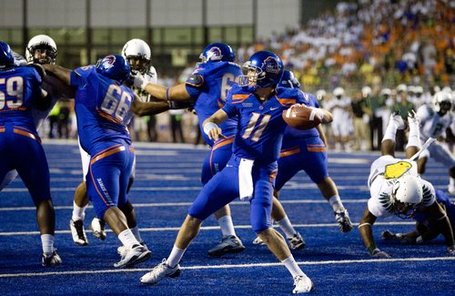 3a. Oregon has improved
3b. Oregon is a different team now

September 3rd was a long time ago. Oregon has come a long way. I commend Chip Kelly for keeping his team focused and salvaging a terrible situation. They squeaked out a close game against Purdue and then took down Utah and dismantled Cal.

There is no doubt that Oregon is playing better now than they did that opening night on the blue. However, I do not think we can just throw out that performance. Oregon was healthy that night. They have not added any new players or implemented a new offense. They have seen the emergence of LaMichael James over the course of the year, but they are also without a very talented Blount.

Oregon may be executing better, but Boise State still had the plan to stop their spread offense and there's nothing to say that the same plan wouldn't work if they played again today.

On the other hand, Boise State is not the same team as they were opening day. They have continued to play solid defense. Yes, they have had some slow starts and closer than comfortable games but that can be expected when they're highlighted on everyone else's schedule. They have a bullseye on their back; everyone is gunning for them. Consequently, it's tough to stay motivated when you're playing sub par competition every week.

By this logic, how many weeks do we have to wait for USC to claim they should be ranked higher than Oregon? Is there a statute of limitations on head to head results?

My favorite argument/excuse that I have seen of late. College football is maddening. There are roughly 120 teams in the FBS and due to college football's refusal to implement a playoff, we're forced to play hypothetical matchups in our heads. The best way that we've found to compare two different teams in two different conferences has been, for better or worse, strength of schedule.

As a fan of Boise State, it's not a favorite of mine. I would prefer that Boise State be judged by things within their control. Last I checked, the PAC 10 wasn't handing out invites. Eight games are set in stone each year. However, I can sympathize with an SEC team making its way through a tough conference schedule. That should count for something.

But here's the thing, strength of schedule should be used as a measuring stick when nothing else is available. Since when has it turned into a sense of entitlement? Have rankings turned into the top 25 most deserving teams or the top 25 best teams in college football?

It seems like I'm seeing a lot of "deserving" arguments these days. I may not agree with it, but I can stomach that TCU deserves to be ranked higher than Boise State based on their schedule. It comes down to what each person values more. It's a subjective argument.

I have a much harder time with the argument that Oregon deserves to be ranked higher than Boise State based on their schedule. To throw out the most objective measure between two teams, on-field results, seems like an egregious misstep to me. Brian Murphy said it best yesterday in a tweet:

Seems like in a sport with so much subjectivity and opinion, we would give weight to on-field results whenever possible.

5. Inferior teams beat other teams all the time and are ranked lower

There are few things that a team like Boise State can control. The most they can do is play the schedule that is in front of them. Even then, they may still get shafted if another non AQ team's schedule is deemed more deserving.

But when Boise State takes care of what they can control and beats the teams they play, it's frustrating to hear people want to so flippantly write off those results. That first game might as well be labeled an exhibition if we aren't going to count the outcome. Why not just say that Boise State played better than Oregon on that day? Why do we even award one team a win or a loss?

To reiterate, the most objective measure we have to compare two teams is when they play each other. If we are so willing to dismiss these results based on timing, location or anything else, we have essentially given into the very worst that college football has to offer.

The sports is so wary of giving the opportunity for teams to prove it on the field. It's a shame when a team actually does prove it and the result gets discredited.