LaTech is hurting and haggard headed into Friday's matchup with the Broncos. Stars Phillip Livas and Daniel Porter are game-time decisions, and Derek Dooley's Q rating is dangerously close to Stephen Baldwin levels. What's left to worry over for the Broncos' big road trip?

Well, Bulldog DT D'Anthony Smith is one reason to fear. Throw in a long road trip on short rest, a history of tough games in Ruston, and the ghost of Tim Rattay, and we could be in for a barnburner. Or not. Read after the jump for LaTech's preview, and get talking about the game in the comments.

What LaTech has been up to

Everyone's perennial darkhorse WAC favorite has thus far been able to replicate last season's Independence Bowl magic. There will be no magic this year for Dooley and gang unless LT finds a way to top LSU and Fresno State. They were illusions, not tricks!

Assuming a Bronco win on Friday night, the Bulldogs will be 3-6 with three games to play, and even if they do win out by miracle of miracles, they could get the the BCS shaft when bowl invites are handed out a la San Jose State last fall. Lose-lose-maybepossiblywin-lose for the Doolster.

Where all the good vibes have gone 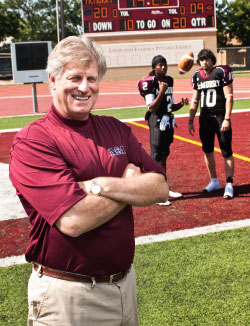 The Bulldogs are pretty typical of a 3-5 team. They play well in spurts, but for the most part, they have lacked execution in the running game, consistency in the passing game, and big performances on defense. If they really wanted to try to be successful, they would try fumbling snaps like the Broncos do.

I am not ashamed to say that Daniel Porter was my preseason pick for WAC Offensive Player of the Year. Derek Dooley was intimidating me with emoticons on Google Chat at the time, so I claim duress. Seriously though, Porter was an animal last season against the Broncos, busting through tackles like he was the future version of Ryan Mathews. Had he been as effective this season as he was against Boise State last season, I might have looked a lot smarter than I really am.

Porter's questionable status for Friday puts a big crimp in the LaTech offense. Add to that Livas' injury and we could see the Broncos hold the Bulldogs to negative yards. QB Ross Jenkins is adequate at best, and though there are some solid players on the line, a lack of playmakers could come back to haunt LT on the final scoreboard.

And now a moment of silence for Taylor Bennett 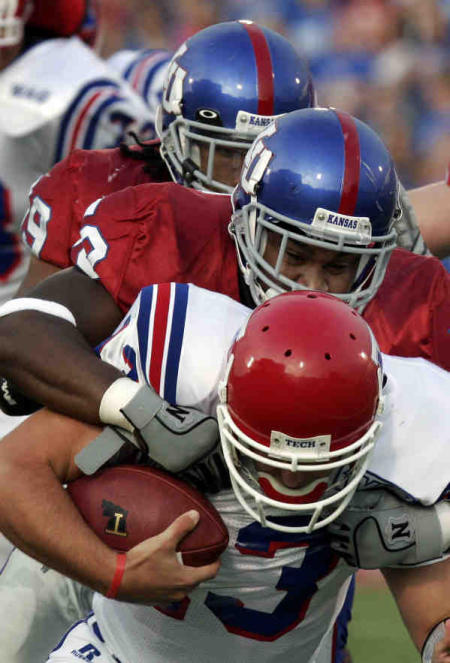 The game simply won't be the same without him completing 30 percent of his passes.

Baker was the player who most often kept the Bronco secondary from sweeping preseason all-WAC lists. He's a good one, and so are many of his friends on the Bulldog side of the ball. I'll get to D'Anthony Smith in a moment, but first let me remind you that leading tackler LB Adrien Cole missed the Idaho game and is questionable for Friday night versus the Broncos. Jeremy Avery says, "Excellent."

The loss of Livas will hurt the Bulldogs tremendously in the kicking game. He had returned both a punt and kickoff for TDs this season, and he is one of the most dangerous returners in the conference. Last week, K Matt Nelson munson'd an extra point that cost the Bulldogs the tie in the Kibbie Dome.

Proof that D'Anthony Smith is good:

Smith's powerful, punishing style has been on display all season long as he leads the team in TFLs and sacks and, most undeniably, triple teams. He attacks offenses from all sorts of different spots along the defensive front, and he works well in combination with other defensive linemen to stunt, twist, and muscle his way to the quarterback and into the backfield. He'll be a handful on Friday night. I predict at least a QB hit, a TFL, and three offensive holding penalties.

The Broncos have faced their fair share of quality defensive lineman through the first eight games, and for the most part, they have done okay.

Boise State has rarely had to keep extra guys in to block on passing plays. The Broncos buy Kellen Moore time by moving the pocket, using play action, and taking advantage of misdirection and quick-hit plays. The occasional big-timer on the defensive line has given the Broncos problems, but for the most part, things have been smooth sailing.

The plan for Friday night

D'Anthony Smith will be one of the best defensive linemen that the Broncos see all season. Since he moves around so much on the line, it will be hard to pinpoint one Bronco O-lineman who will have to step up. They all will. I imagine that Smith might see a lot of time at defensive end and maybe find himself lined up over Matt Slater, which is where Carl Ihenacho was last week and Carter was in the Fresno game. If the Broncos keep with the status quo, Smith might only see a single blocker with the occasional help from the guard if he's free.

What else will determine the outcome of the game on Friday night? Here are just a few ideas. Add your own in the comments.

What are you looking at as a key to the game on Friday? Who needs to step up? What LaTech players do the Broncos need to watch? Can the O-line contain D'Anthony Smith? Leave your thoughts in the comments.