Can the Boise State defense slow down the Nevada running game?

Share All sharing options for: Can the Boise State defense slow down the Nevada running game?

Nevada is being hailed as one of the greatest rushing offenses in the history of college football. Does Boise State's defense stand a chance of stopping them?

To be sure, the Wolf Pack have not seen a defense as solid as Boise State's for a long time. Irresistible force meets immovable object? We'll see on Friday night. In the meantime, join me after the jump for a look at some in-depth stats on both sides of the debate.

By now, you know the characters: QB Colin Kaepernick, RB Luke Lippincott, RB Vai Taua, Chris Ault, the devil to whom Chris Ault sold his soul in exchange for the Pistol offense. On Friday, Nevada will do what Nevada always does: Run the ball until someone makes them stop. At that point, they will call pass plays, and Kaepernick will decide to scramble 75 percent of the time.

Can you blame them for being so obvious and transparent? Even when teams know the run is coming, they cannot stop it. Nevada has been downright dominant in virtually every situation this year. Here are the numbers.

(Note: Success defined as gaining 50 percent of needed yards on 1st down, 75 percent on 2nd down, and 100 percent on 3rd and 4th down. Power attempts defined as third or fourth down with two yards or less to go or goal-to-go attempts from the two-yard-line or closer.)

To put things into layman's terms, Nevada gets first downs on two out of every three carries. Lippincott is the most effective runner on the team, but all three (Kaepernick, Lippincott, and Taua) have successful carries over half of the time. On 3rd and short, the Wolf Pack are almost automatic. Nevada has had one of the most successful offensive streaks that you will ever see.

Bronco fans should take comfort in last year's game against the Wolf Pack. In the midst of another prolific rushing season, Nevada managed only 144 yards against the Bronco defense. Justin Wilcox's scheme worked to perfection to stop Kaepernick from making plays. The inside push of the defensive lineman held Taua in check. There was no Lippincott last year, but he would have been running into the same wall that Taua did. The Boise State defense outplayed the Nevada offense.

No doubt Nevada has improved from last year. In that case, is the 2009 Boise State defense better or worse than the 2008 defense?

The question is completely open for debate, and in the end, there is probably no way of actually knowing the right answer. For what it's worth, I think last year's version was better. The 2009 team seems a little more undisciplined, and they miss more tackles. If the Broncos could have carried the defensive effort from the Oregon game through the whole season, I would vote for the 2009 defense being the better of the two. However, I think it's safe to say that hasn't happened.

Boise State's rush defense numbers are quite good. They only allow one-third successful rushing attempts on first down and one-fourth successful rushes on second down. If the Broncos can maintain those numbers on Friday, and if Nevada chooses to rush on first and second down, chances are good that the Wolf Pack will be in a 3rd and long. And that is exactly where you want Nevada to be.

The keys to success for the Boise State defense will be:

What Boise State might do to stop the Wolf Pack

Last year's defensive scheme involved a safety taking Kaepernick one-on-one on running plays, and it worked like a charm. Boise State pinched the middle of the line to take away the dive plays to Taua, and Kaepernick could not shake the equally athletic DBs when he got out to the edge. Don't be surprised to see a similar strategy on Friday night. Boise State has the athletes and the depth to pull it off. Not many other WAC schools do.

Also don't be surprised if you see a little wrinkle that Boise State showed last week against the Utah State Aggies. Facing a similar style of offense, the Broncos came out in a standard 3-4 defense. Here's how it looked: 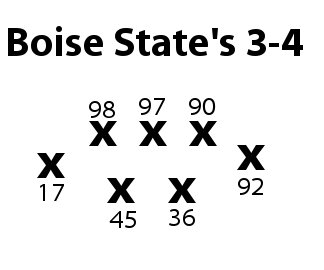 Winston Venable moved in to outside linebacker, Chase Baker dropped to nose tackle, Billy Winn bumped out to defensive end, and Shea McClellin stood up to play the outside linebacker opposite Venable. The Broncos flipped the formation depending on where the ball was placed on the hashes.

Just like the pro-style 3-4 defense, the Broncos can do a lot of different things from this formation including blitzes, stunts, and zone blitzes. McClellin, who played linebacker in high school, was seen dropping into coverage on his first quarter interception, Winn would occasionally come off the line to spy on Borel, and Mackey and Tevis were always a threat to blitz. The formation worked against Utah State. Will it return Friday night against Nevada?

You've seen the stats and heard the hype. How do you think Boise State's run defense will do against the Wolf Pack? Would you prefer to see last year's strategy return or try out the new 3-4 look? What defensive players will play the biggest roles? What will be key to stopping the run? Share your thoughts in the comments.