Later tonight, Boise State embarks on its final road trip of the regular season with a visit to Utah State. Are the Broncos in for more trouble than it seems?

Many people are labeling this a "trap" game, but on paper, the Broncos should have no trouble. What are your thoughts? Join me after the jump for the airing of pregame jitters, and feel free to share any worries, predictions, or reactions in the comments.

Toward the start of the year, the Boise State defense unveiled one of the coolest defensive wrinkles since last year's Nevada game. The 3-3-5 was born, and it was a hot blitzing mess.

And as if preparing for mystery blitzes and defensive ends playing linebacker wasn't hard enough, Justin Wilcox went and upped the ante. Bam! There's this now. 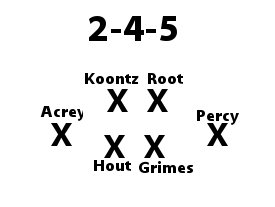 My apologies for being a week or two late with this. The formation above is taken from the Louisiana Tech game, and the result of the play was Darren Koontz chasing Ross Jenkins into an incompletion. The set-up is simple: a DE and DT lined up in the tackle spots, the two LBs lined up as stand-up defensive ends, and the other DE and DT at linebacker. Against the Bulldogs, Boise State dropped Derrell Acrey and J.C. Percy into coverage, blitzing Koontz and Jarrell Root from the middle, along with the rush of Byron Hout and Greg Grimes.

Depending on the rush, that could put Hout against an offensive guard on the pass rush, and it has Koontz and Root getting a full-speed head start on the QB. The Broncos could also switch it up and bring a linebacker off the edge and drop pretty much anyone into coverage behind.

Did somebody say "trap"?

From the message board stylings of Scout.com to the word jumble of Graham Watson, the experts are soothsaying like there's no tomorrow. Which there won't be. If the Broncos lose.

Both Boise State and Nevada have games against teams with losing records this weekend and it would be easy to look ahead to next week’s game between the two schools that will ultimately decide the conference title.

Her score prediction also hinted at the Broncos looking ahead but ultimately landed on the side of reason (score update: Reason 1, Graham Watson 134). The same could not be said of Scout.com.

This game doesn't have to be close.  But it will be and the Aggies can win if Boise State's players aren't ready to a man.  This is an up-and-coming team to be sure.  Don't be surprised if they beat Idaho next week.  If Boise State doesn't come out playing their best football of the season, it is the Bronco players who will be surprised by the final result.

All of which leads me to an interesting question: Are you worried?

No doubt the Nevada game is a huge one, but Boise State is rarely accused of looking ahead. Could the youth of this team change that perception? Is this a game where inexperience plays a factor?

There is enough tape on USU for the Broncos to see that the Aggies have talent and can be dangerous. If you believe that Boise State is hitting its stride and rounding into championship form, then you should have no worries about the Broncos overlooking the Aggies. If you think BSU is still finding itself, then I imagine this game worries you more than most.

Utah State plays to its competition ... will that make them a Top 5 team tonight?

Throughout the season, Utah State has been able to remain close with just about every opponent it has faced. Its largest losses were 18-point defeats at the hands of BYU and Utah. Its biggest FBS win was by 15 against San Jose State. Does that mean tonight's game against the Broncos will be close?

It very well could be, considering the weather, the ESPN adrenaline, the way the ball bounces, and Boise State's previous Friday night history.

However, it could just as easily be a blowout, too. Utah State has played to its competition so far this year, but they have yet to face a team as talented, deep, disciplined, and athletic as Boise State. The Broncos will be the best team to ever enter Romney Stadium. It will take more than a football idiom to get Utah State to play to the Broncos' level.

The bigger worry would be if Boise State plays down to its competition. Judging by the way they came out in their last few games, I'm not sure we'll see that happen again this season.

only keeping it that low due to the impending weather…..would love to see Kellen run the no huddle all the way down the field

Let's talk about the no-huddle for a moment. Are the Broncos more dangerous when they go no-huddle? They use the style sparingly, yet they are coming off a game against Idaho where they used it perhaps more than any other game this season. It would work against the Aggies because USU is thin along the front four, can be physically dominated over the course of the game, and is still learning how to play Gary Andersen's defense.

On another note: What weather would make the biggest difference? I rate weather in this order:

We could be in for No. 4 and No. 5 tonight, and depending on whether or not Mark May is the antichrist, maybe No. 1.

What's the pulse on the Bronco defense? Mikrino wants to know.

I don’t think Utah State will be any better than Idaho was, but the Broncos did bleed yards that whole game. Fortunately it never translated to points, and as such, was largely ignored.

The Broncos played some of their best defensive football in recent weeks against Louisiana Tech, San Jose State, and Tulsa (although the scoreboard didn't always show it). They did not play great against Idaho.

Diondre Borel and Robert Turbin can roll up the yards, so it will be important for the Bronco defense to get off the field on third down and prevent the Aggies from getting TDs in the red zone. Chances are good that the Boise State offense will be able to score at least 30. You'd hope that the Bronco defense can keep the Aggies from reaching the same.

I'm comforted by what the Broncos did to the Aggies last year, and according to Kyle Wilson (via the Scott Slant), it could be more of the same tonight.

Kyle Wilson knows BSU will have its hands full. Wilson said the Broncos will counter by "trying to get them out of their comfort zone. We’ll probably be disguising and showing different things."

What mood are you in as the USU game nears? Nervous? Apathetic? Excited? Do you think the Broncos could be guilty of looking ahead to Nevada? Share your thoughts in the comments. Gamethread will be up later tonight.