Share All sharing options for: Gameballs for Boise State versus San Jose State

The Broncos cruised to a 45-7 win over the Spartans on Saturday thanks to strong performances across the board. Which players earned a gameball? Find out after the jump, and feel free to name your own winners in the comments.

In a landslide, the Heisman Trophy token small conference QB was voted by you all as player of the game. Was there really any other choice?

Technically, there were three other choices, but Moore's play on Saturday made the competition irrelevant. Hammered and beaten for large portions of the first half, he still found a way to put up his typical, machine-like numbers: over 60 percent completion rate and three scores. And he's totally taking it to Pittsburgh's Bill Stull in the Davey O'Brien fan voting.

What really impressed me with Moore on Saturday was his third down efficiency. Just before his TD pass to little brother Kirby, Kellen converted a 3rd and 7 to Austin Pettis. He converted 3rd and longs to Matt Kaiserman and Tyler Shoemaker that led to touchdowns, and he found Richie Brockel on 3rd down for a 23-yard gain on a drive capped off by a Pettis TD. I dare say Moore was better than he had been all year, proving that getting consistent pressure on him only makes him mad.

8 total rushing yards in first half for Broncos

The only thing missing was Ian Johnson with his hand on the back of a lineman, waiting for a hole to open.

Mad Doug's 36-yard TD parade with 20 seconds left in the game provided the Broncos with the winning 38-point margin. But more importantly, degenerate gambler got paid. The Broncos came into the game as 35-point favorites, so Martin's TD was the score heard round the deadbeat bars. Martin may never have to buy a drink in Reno for as long as he lives. 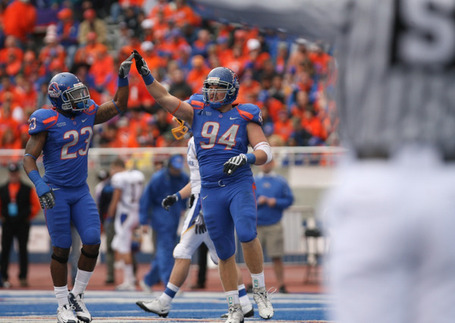 Think back to the beginning of the season. Go ahead. Think back. What Boise State defensive lineman were you most excited about seeing? Also, while you're back there, did you ever think we'd be seriously discussing whether Oregon would pass BSU despite the fact that the Broncos beat the Ducks on opening weekend?

But back to that defensive line thing. Hout was the player on most fans' minds, considering the way that he closed out last season as a true freshman. He was awesome in 2008. He has been oddly quiet in 2009. Ryan Winterswyk and Shea McClellin are the clear-cut No. 1 and No. 2 defensive ends, and Hout has kind of been lost in the shuffle. Well Saturday was Hout's reminder that he can be every bit as dominating as he used to be. He finished with two TFLs and a sack, and he was noticeable for the first time in a long time. Here's hoping it is a sign of things to come.

Defensive MVP whom no one noticed

Breakout performance of the game

Moore led the team in receiving yards and nepotism on Saturday, prompting the following questions: Would Aaron Burks have looked so good at this point in the season? Will Kirby be a starter going into next fall? Do the Moores have a third, less athletic brother like Cooper Manning?

Mitch Burroughs catch of the game 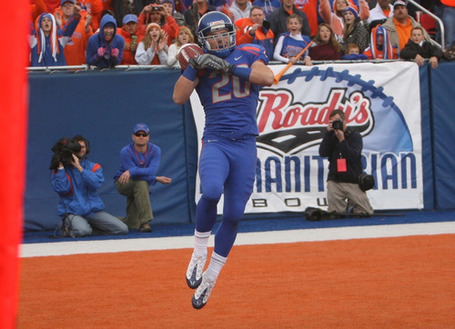 I thought it looked funny when I saw it live. The Mitch Burroughs Experience is really doing a number on the wide receiver position.

Robinson's strip of Lamon Muldrow with under a minute left in the first half marked the beginning of the end for all those optimistic San Jose State fans. Boise State went on to score and take a 24-7 halftime lead in a game that should have only been 17-7 at the half with SJSU holding faint hopes of keeping it close in quarters three and four. Not on Jason Robinson's watch. He lives for late-second-quarter heroics.

The replay booth was a happening place on Saturday, as the on-field refs chose caution over clarity with several close calls. In the end, the refs got all the decisions right, but most of them were decisions that could have been made with the naked eye as it happened. If my officiating is going to be inept, I at least want it to be inept and not waste my time. The bygone WAC official had that down to a science.

Least talked-about game of the season: The San Jose State game. Seriously, I wouldn't have known it happened if I didn't watch it with my own two eyes.

Best on-air name-dropping during a KTVB broadcast: Tom Scott. Many thanks to Tom Scott for giving OBNUG a proverbial rec during the broadcast. He didn't have to do that. (ed's note: Yes, he did. I blackmailed him.)

Most excitable high five: The girl on the right. 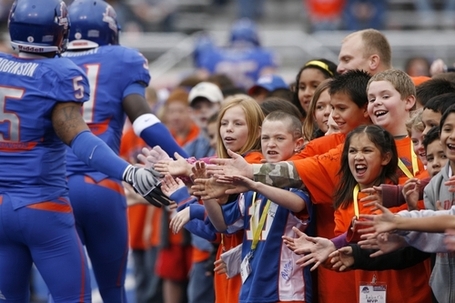 Least enjoyable theme. Doug Martin on the bench. I don't like it one bit.