The Broncos (and likely thousands of Bronco fans) will visit the way too friendly confines of Romney Stadium tomorrow evening in Logan, Utah to take on the Utah State Aggies. The Aggies, by all accounts, are a much improved team this year...but unfortunately their record doesn't show it. They notched their 3rd win of the year last weekend against a down-and-out San José State squad and do bring some firepower to the field in the form of slippery QB Diondre Borel and 1,000-yard rusher Robert Turbin—but alas, it probably won't be enough for the Aggies to get off the schneid after 8 straight losses to Boise State. Sure, there may be more reason to watch the game this year, but the results should be as predictable as an Austin Pettis 3rd down catch. Needless to say, there is a lot to be learned about this week's foe (don't worry, Kellen Moore already knows their defense intimately). Hey, I know...let's explore the Aggies through the magic of factoids and childish jokes. It's time to get to know your enemy, Bronco Nation...so take notes.

10) Why is the New Mexico State Aggie a cowboy and the Utah State Aggie a pig cow bull? Well, an Aggie mascot generally denotes that the school is an agricultural institution. Utah State was established in Logan, Utah as the Agricultural College of Utah in 1888 and didn't become Utah State University until 1957. The first athletics teams actually were known as "the Farmers". I personally think that "Soil Strikers" would've been a much more fearsome nickname.

"I hate the Jews, but I love my Members Only jacket"

7) The Aggie football team's most celebrated alum is Merlin Olsen, a Hall of Fame defensive tackle with the Los Angeles Rams. Merlin, who I'd like to think at least somebody nicknamed "the Wizard",  was a 14 time Pro-Bowl selection and named to the NFL 75th Anniversary All-Time Team in 1994. You may also remember Olsen playing Charles Ingalls' pal Jonathan Garvey on Little House on the Prairie and trying to guilt you into buying FTD flowers. I just ordered two dozen carnations for Austin Pettis.

6) In 1909 the first senior class gift was an "A" placed on the west side of Old Main tower. The "A," now on all four sides of the tower, can be seen throughout the valley, especially at night when lit in white. For special occasions and athletic wins, the "A" shines blue. In other words, it only shines during basketball season.

5) Utah State plays their football games at Romney Stadium (capacity 25,313). The stadium is named after coach E.L. "Dick" Romney, the Aggie coach from 1918 to 1949. Romney (yes, those Romneys) has the most career wins in Aggie history (128), and as you might expect, the most career losses as well (91). Before the yearly clash with in-state rival Utah, Romney used to stand at the 35-yard line of their football field and try to dropkick a football through the goalposts. Romney maintained that every time he made the kick, the Aggies were victorious—his accuracy was clearly a bit off as his Aggies only beat Utah 7 times in his 29 years at the helm. Should've gone with the higher-yield coin flip, Dick.

4) The city of Logan, Utah, the home of Utah State University, was founded in 1859 by Mormon settlers sent by Brigham Young to survey a fort site. The new community was either named after a Scottish fur-trapper named Ephraim Logan or an Omaha Indian chief named Logan Fontanelle. I would like to propose that the town was actually named after the mysterious mutant drifter Logan, who later joined the Weapon X project and then became known as Wolverine. Think about it...this would be way cooler. 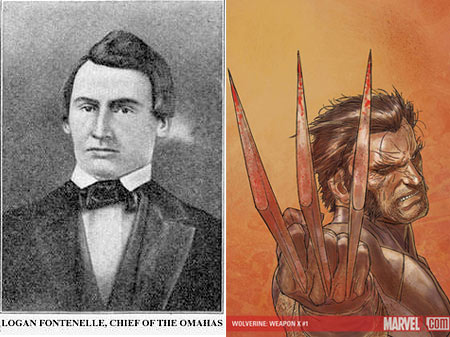 3) In 1919, Utah State defeated Idaho State 136-0 in Logan. Every October, Aggie alums mark the anniversary by driving to Pocatello and kicking it in the groin.

2) In 1989, for a tax write-off on the unsold inventory, Apple Computer Inc. buried about 2,700 unsold Apple Lisas in a guarded landfill in Logan. Wonder what they're gonna do with all those unsold Brent Guy bobbleheads?

Wait...why are you guarding that landfill, again?

1) Utah State has long-standing ties with NASA and conducts extensive aerospace research. Utah State is one of only six universities to participate in NASA's New Millenium program, and as such, conduct research on the Geosynchronous Imaging Fourier Transform Spectrometer (GIFTS). I don't think I am exaggerating when I say that the Geosynchronous Imaging Fourier Transform Spectrometer will change the world someday...but I probably think that because I'm assuming it's like that machine in Quantum Leap.