Share All sharing options for: Know your enemy: Idaho edition

The suddenly relevant Vandal football team and their "fans" will sweep into the Valley this weekend to take on our Boise State Broncos. Beside causing a massive shortage of Pabst Blue Ribbon, the Vandals are hoping to get back on the winning side of the rivalry after a solid decade in the gutter. Bronco fans know that we're just two tantalizing wins away from erasing the only bragging point that the Vandals have left and the Vandals know they can at least still drink afterwards. Robb Akey has done his level best to bring the spark back to the rivalry while Coach Pete gives them the same Lou Holtzing that he gives most any team. Let's be honest, the Vandals have more reason for optimism this year than they've since the 90s (notice I said "optimism", not "confidence") and there is a lot to be learned about this week's foe (don't worry, Kellen Moore already knows their defense intimately). Hey, I know...let's explore the Dirtbags Vandals through the magic of factoids and childish jokes. It's time to get to know your enemy, Bronco Nation...so take notes

10) In 1871, brothers Asbury and Noah Lieuallen and about 20 families arrived in what is now Moscow, Idaho. The settlers were drawn in by the abundant grassland and availability of timber for building. The abundance of camas bulbs, then used as fodder for pigs, in the area led the settlers to first name the town Hog Heaven. Years later, several U of I sororities adopted that same name.

9) Besides the University of Idaho—Moscow is home to 21 other academic institutions...among them, Mr. Leon's School of Hair Design and the Moscow School of Massage. Surplus baby oil from the School of Massage is donated every year to the football team. 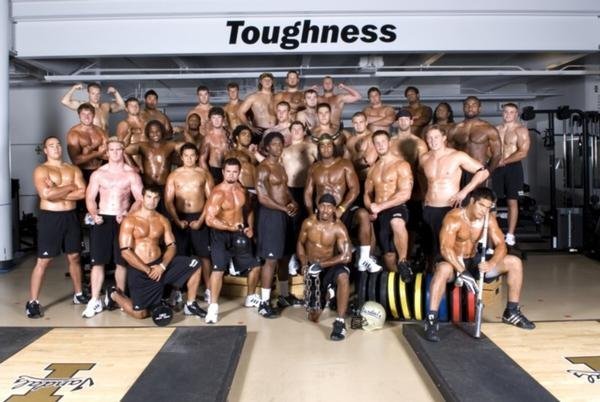 8)  The Vandal football team started play in 1893, and went 2-0-1 in their first year with two wins over Washington State and a tie against Spokane AC. It took the Vandals until 1900 to win another game. Ahh, tradition.

7) Idaho's longest tenured coach in their history was John G. "Pinky" Griffith, who coached for 10 seasons in Moscow and went 28-22-2. Griffith left Idaho to coach at Iowa after the 1906 season but returned as Vandals coach in 1910 and took over the University of Idaho's Entomology Department. Prior to coaching, Griffith was a fullback and team captain for the Iowa Hawkeyes' football team.

6) A mule named Idaho Gem, the world's first cloned equine, was created by researchers at the University of Idaho and Utah State University. Later that same year, the school cloned Buddy Hackett to be their basketball coach.

5) The Kibbie Dome, shown here, is the smallest football venue in Division 1-A with a capacity of 16,000. When, or rather, if the Kibbie Dome happens to sell out there's always a little extra room in Robb Akey's mustache. 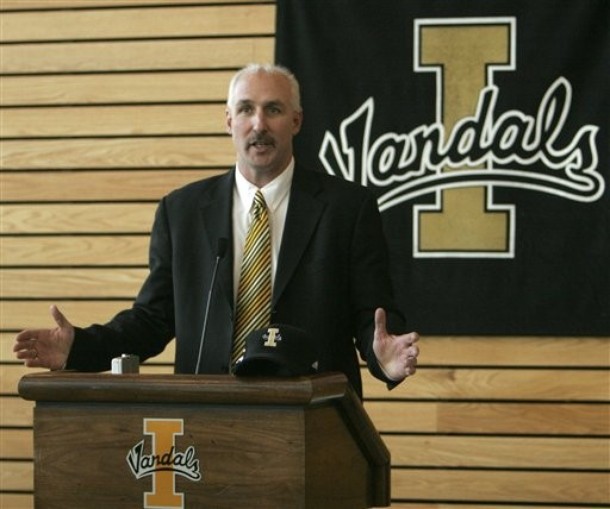 "There's room in here for everyone"

4) The campus master plan for the University of Idaho was developed by the Olmsted Brothers, founders of the American Society of Landscape Architects and sons of Frederick Law Olmsted, who designed New York's Central Park. The Olmsted Brothers radical design ideas for the campus included grass, trees, gravel, and trees.

3) Before moving to the Kibbie Dome, the Vandals' football team played their home games at Neale Stadium, an "earthen horseshoe" that was named after UI president Mervin G. Neale. The stadium was condemned in 1969 and burned down by an arsonist that same year. Why are you looking at me? I wasn't born until 1980.

2) Two famous alums of the Vandal football team are Jerry Kramer and Bill Fagerbakke. Kramer went on to fame and fortune as the Intermountain Gas spokesman after his playing career in Moscow was over and Fagerbakke went on to become a starfish. Ok, Kramer was pretty good, I guess.

The forgotten sport of Coach Hoisting

1) Idaho has an all-time win percentage of only 44%. Sure they, won 12 straight against the Broncos in the 80s and 90s, but that was much more anomalous than anything they've experienced before or since. They've never won a national championship, notched an undefeated season or even made a dent in the Division 1-AA playoffs. Despite their "streak", the Broncos lead the all-time series with the Vandals 20-17-1 and it's gonna get more lopsided from here on out. Just remember all this when your revisionist Vandal co-workers try to reminisce about the "good old days".