Share All sharing options for: Boise State gets big time WR recruit for 2010

News coming in off the recruiting wires is that Vista, California wide receiver Troy Ware has given a verbal to Boise State. The 6'2" 165 lb. Ware is said to possess 4.5 speed in the 40, and is rated as a 3-star recruit by Rivals.com and was held an offer from nearby San Diego State. Ware caught 26 passes for 488 yards in 2008, good enough for an 18.8 YPC average. Ware was also able to convert those catches into 4 TD passes for the mainly run-oriented Panthers a year ago. Ware chose a poor time to make his official trip, as he was on hand for the ugly UC Davis game last weekend, but he left impressed with the staff and facilities and rang the coaches up last night to share the good news.

Don't expect many more commitments, if any, this recruiting cycle as the Broncos had few schollies on tap for next season already. If no more commits come down the pipeline, it looks like we'll have excellent bookends to the 2010 class...starting with DE Tyrone Crawford and ending with a soft-handed receiver with good height to boot. 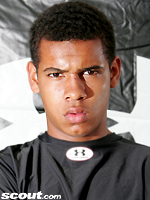