Would you boo the Broncos?

Share All sharing options for: Would you boo the Broncos?

Boise State is an undefeated, Top Ten team three years removed from a BCS win and in position to capture its seventh conference championship in eight seasons. What would it take for you to boo the Broncos? Is it heresy to even think of booing? After the jump, let's discuss. 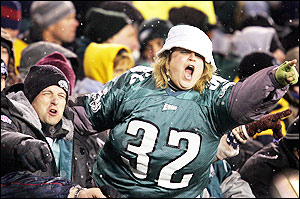 The booing paradox comes courtesy of a Dustin Lapray sonnet-turned-newspaper column following last week's UC Davis game. In it, Lapray recounted moments in the fourth quarter where boos could be heard from the sparse Boise State crowd. Needless to say, it was cause for great consternation in Lapray's imaginary Dead Poets Society.

Two instances in the fourth quarter actually emitted boos from the crowd, struggling with nasty conditions and the fact that their Broncos were not performing to the outlandish standards now expected of them...

My question: How can a Bronco fan boo an undefeated, Top 10 team, slugging it out in a rain-lashed struggle?

I wasn't able to hear the booing on Saturday night, but I would assume that some it might have come late in the fourth quarter with the Broncos leading by 11 and being forced to punt after a three-and-out that went "Jeremy Avery one-yard rush," "Kellen Moore sack," and "Kellen Moore dropped interception." No doubt there might have been boos on fumbled snaps or any of the nine accepted penalties against the Broncos.

But does that make booing acceptable? And more to the point: Would you or have you booed the Broncos?

The debate could be a good one because I do not think there is a right or wrong answer. Can you convince me otherwise? Booing means something different to every person. To one man, booing is a temporary release of frustration. To another, booing is a cardinal sin of faithful fandom. Here are just a few ways to look at it.

How about a couple of "what ifs"? Since this debate is really about whether booing a successful team like the Broncos is ever okay, imagine that each of these examples below happened next week against Tulsa. Boise State is ranked No. 6 and heavily favored over the Golden Hurricane.

Situation #1: First quarter, Boise State has the ball at the Tulsa 35 yard line after driving from their own 12. Kellen Moore is 5-for-5 on the drive for 48 yards. Jeremy Avery has 5 yards on 5 carries.

Would you boo? What if it were a different quarter? What if the score were different?

Situation #2: Third quarter, Boise State leads Tulsa 24-14. Broncos are driving on their opening possession of the second half with the ball first and goal from the Tulsa 9 yard line. Thomas Byrd and Kellen Moore fumble the QB-center exchange and Tulsa recovers. It is the second botched snap of the game and the first that the Golden Hurricane has recovered.

Would you boo? What if the score were different? What if the Broncos had already lost a fumble on a bad snap?

Situation #3: You paid $40.00 for a ticket to the Tulsa game and $300.00 on travel and lodging to get to the game. Boise State leads Tulsa 17-14 in the fourth quarter with both BSU TDs coming from defense and special teams and Tulsa having just missed on several opportunities to add to their point total. Boise State's offense goes three-and-out for the sixth time of the night.

Would you boo? What if the Broncos were behind? What if you drove to the game? What if your ticket was $75? What if it was $12?

Keep in mind, there is not necessarily a right or wrong answer to the question of booing. I'm just curious what Bronco fans think and how they would act in certain situations.

For me, I'm not much of a booer, partly because I'm a quiet guy and partly because I take my frustration out in other ways. I choose to internalize a lot of my gameday frustration and hope it goes away by the time the Broncos take their 35-point lead in the fourth quarter. Is it healthy? Probably not. Does it always work? So far this year only twice.

One thing's for sure; I don't get too upset at circumstances that the Broncos cannot change. For example, if Brad Elkin was the team's only option at punter and he was terrible, I wouldn't boo Elkin because my booing would be pointless. It's not like the Broncos could switch to a different kicker.

I tend to only voice my frustration at penalty calls or mistakes that the team makes over and over again. On occasion, I have found myself getting horribly upset at quarterbacks who are struggling and missing wide open receivers. I'm not sure why I'm this way, but I was very close to booing/strangling Taylor Tharp at Washington. On a happier note, one of my greatest pet peeves in life is poor clock management, so I'm fortunate to cheer for a team with a genius for a head coach.

Even when I do get upset, though, my booing is more like a hearty "Come on!" In fact, that's exactly what it is. I "Come on!" rather than boo, and I add inflection and tone to those two words in order to fit any situation.

Now it's your turn. What would it take for you to boo the Broncos? How would you react to the situations above? What are your thoughts on booing in general? I can't wait to hear your perspectives.