Pick yourself up off the floor, Bronco fans. It may seem like the end of the world is near, but we still have free Baja Fresh to give away.

Join me after the jump for some observations and our results from the past weekend. Make sure you check back on Thursday for this week's contest.

The Boise State game didn't end until the early morning Sunday. I would use this to blame the pollsters for being lazy and going to bed without watching the game but they seemed to hold up their end of the bargain. TCU gained but Boise State remained ahead them in every major poll. However, this was not enough. I spent all Sunday waiting for the other shoe to drop and it did.

Well that was fun

Idaho was sure getting a lot of talk the past few weeks. People started noticing the Fighting Akeys and their resurgence. They started getting mythical midseason awards. There was chatter about Gameday coming to Boise for a matchup between an undefeated Boise State team and a one-loss Idaho squad (and there still is). Then the most egregious thing happened when Vandal alum Mark Schlereth took to the Mike and Mike Show to talk up the Vandals. Well, I think he angered the gods. 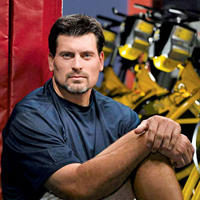 Twenty-four of us picked Idaho to cover, and Nevada laughed at us. Guess we won't have to hear too much about Idaho from here on out. Oh wait...

In calculating the results this week, one number kept showing up: Five. Twenty of us picked 5 correct games this week. I was starting to worry that this might have been a doozy of a tiebreaker.

Good thing we implemented this tiebreaker thing because it sure is coming in handy. We even had three people guess the tiebreaker correctly this week (Finloopio, mrefficiency, and Loque). Unfortunately, none of them were at the top.

This week, we had yet again another tie for the top spot. After all the tallying, BustersBFF and TreuBleu stood alone with 7 correct picks apiece.

However, with a tiebreaker of 57, BustersBFF takes the win this week.