Share All sharing options for: Game balls for Boise State versus Hawaii

Boise State cruised past Hawaii 54-9, thanks to solid efforts in all three phases of the game. What stood out the most from the Broncos' big win on the islands? I'll weigh in with my game balls after the jump, and feel free to add yours in the comments.

Moore was very un-Taylor-Tharp-like in his dissection of the Warrior secondary. His five passing touchdowns were a career high, and he went sans turnover for the fourth time in seven games. It's very hard to beat the Broncos when Kellen Moore is on his game, and he was most definitely on his game Saturday night. Should the Broncos end up in the Hawaii Bowl, I will be significantly less worried than I was last time.

Runner-up for player of the game

While Kellen Moore took nearly half of the reader votes, Kaiserman was a pleasant surprise at No. 2. The grayshirt, redshirt, concussed running back looked healthy and happy running over and through Hawaii defenders to the tune of 122 yards and a touchdown. He outrushed the entire Hawaii team, and he did so in 35 minutes of work (his first carry came at the 5:00-minute mark of the 2nd quarter). That's downright Jeremy Avery production. Or Doug Martin production. Or D.J. Harper production. Or ... Brock Forsey production? How about we just say that Kaiserman fits in well with the Bronco backfield and leave it at that?

Award for eating a chalupa and then falling down the stairs

Hawaii's QB excused himself late in the first quarter with a head injury following a sack by Billy Winn. Oh, but the chalupa was so good for awhile there! 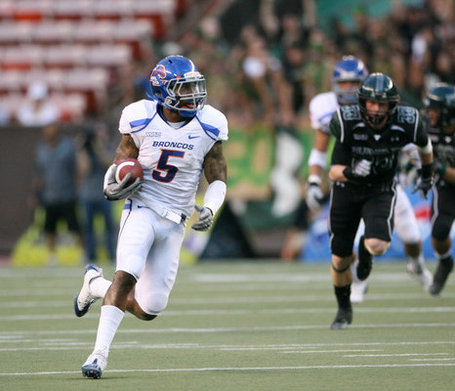 I am not surprised that the Broncos pulled off a perfectly executed fake punt, but I am surprised that Kyle Brotzman throws the ball better than several WAC quarterbacks. On fourth and four, Brotzman completed a strike downfield to a wide open Jason Robinson who escaped out of the left side of the formation with the roll right playfake. A 28-yard pass on fourth and four? What a call. I love fake punts so much I should probably marry them.

Take away Brotzman's missed field goals this year, and is the 2009 Bronco special teams the best ever?

Yikes. That thing was ugly. But considering that it lead to zero Bronco points, perhaps Dunnachie knew what he was doing all along.

Coordinator award for excellence in the field of coordinating

Wilcox's gameplan involved Jeron Johnson sitting back in a centerfield position, breaking up lazy long bombs by the Warrior QBs. Did it work? I'd say so. Johnson's two picks came as a direct result of his staying on top of deep receivers, and Wilcox's other mad scientist schemes (Venable in man-to-man, focus on turnovers) worked to perfection.

Harsin's contribution to the win was a little less overt but just as important. Believe it or not, but the Boise State offense did not convert a third down until the second quarter. The game really started turning when Harsin called Titus Young's number on a couple of short passes that got the offense going. That drive ended in a TY touchdown, and the rest is history.

Since the BCS axis of evil has robbed Bronco fans with hopes and dreams of a fair world, we may as well turn our attention to the not-yet-disappointing Moore for Heisman campaign. Update: The nation's No. 1 passer threw for 223 yards, five touchdowns, and no picks as his team stayed undefeated and in the Top Ten.

Don't you dare even tell me that Moore has no chance because he plays on a non-BCS team and is only a sophomore. Don't you take this from me. I need this. 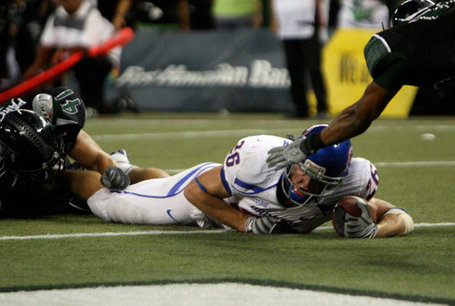 Taking nothing away from Kaiserman's spirited rushing, the Bronco offensive line was downright moving people on Saturday night. The holes were big, and Kaiserman took full advantage. It was a good night to be a healthy Bronco running back not named Jeremy Avery.

Though it might not be remembered as such, Johnson's INT in the Hawaii end zone might have been the game's biggest play. Following a one-play Bronco TD drive off a turnover that made the score 17-0, Hawaii marched down the field with fourth-string QB Shane Austin all the way to the Bronco 14-yard-line. A score here would have kept the game close and given Hawaii some much-needed momentum. Instead, Johnson stepped in front of an Austin pass, the Broncos took the ensuing possession and went 80 yards in five plays for the score. What could have been a 17-7 game, turned into a 24-0 game, and Boise State never looked back.

Suspicious bad trend that could sink the Broncos at some point

Boise State was only 3-for-13 on third down conversions and all three came on the legs of Matt Kaiserman. Better add that to the to-do list, under the giant, Sharpie scribble "BAD SNAPS ARGGGGG!!!"