Warriors Will Throw Q&A on Boise State vs. Hawaii

Share All sharing options for: Warriors Will Throw Q&A on Boise State vs. Hawaii

The Hawaii Warriors have given Bronco fans many reasons to loathe them over the years, but here's a reason not to: they blog like champions. No other WAC team has the online support that Hawaii does, and that support begins with Warriors Will Throw.

WWT knows Hawaii inside and out, and main blogger Tombo was kind enough to answer some questions about the team and the big game on Saturday. To the jump and beyond!

The roles of Tombo from Warriors Will Throw and Kevan from OBNUG will be played by the Hawaiian Punch mascot and the 7up dot, respectively.

It used to be that Hawaii vs. Boise State was THE marquee WAC game. Where does playing the Broncos rank for Hawaii fans now? Is Boise State Hawaii's No. 1 WAC rival? If not Boise State, then who is?

It's a toss-up between Boise State and Fresno State, though I guess the rivalries are different. The UH-Fresno series has been full of high drama, big wins, devastating losses, bad blood, and has been somewhat evenly matched. The UH-Boise series is unfortunately a little more one-sided, but that just makes the fans hungrier for victory, especially since Boise is always one of the top teams in the land, the bastards.

What are Hawaii fans expecting on Saturday? A win? A moral victory? Nothing? How has the first half of the 2009 season tempered expectations on the island?

Some fans have given up on the season, calling anyone with any hope at all a delusional Kool-Aid drinking fool. That being said, I expect a UH victory! Actually, the potential is there for a very competitive game. UH has a lot of talent, but the talent has been either injured or inexperienced. Sometime this season, UH will put the pieces together. I'm hoping it's Saturday, October 24th.

Since starting 2-0, you guys have had a rough time of it. Compare Hawaii's 2009 season to a period in history, the career of a famous child actor, or a fast food item/chain.

It's like you're eating this delicious chalupa and all of a sudden you fall down the stairs.

What do the Warriors do well on defense? Who has been the most pleasant surprise on D?

The defense is full of hard hitters, but it's been a tough year and they've had problems against both the run and the pass. Safety Spencer Smith has been a pleasant surprise.

If there is one part of the Boise State offense that Hawaii could/should take away on Saturday, what part would that be?

One of the biggest keys to the game is getting pressure on Kellen Moore. The UH defense hasn't had much success getting to the QB in the past few games, and that's really hurt them on third downs.

Is Bryant Moniz the next Colt Brennan or the next Inoke Funaki? What do fans think of him?

Bryant Moniz has been a really big positive among a season of heartbreaking negatives. He makes great decisions and is very cool and calm in the pocket. He's accurate and can run if he needs to. This is just his third career start, so it'll be a big test for him and the offense. 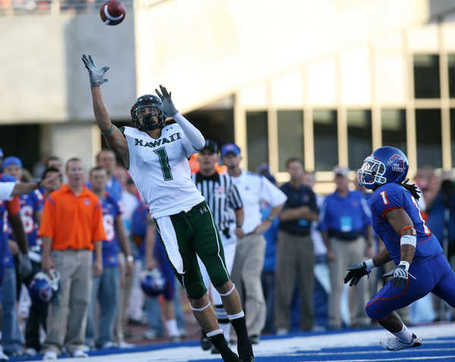 Tell me two truths and a lie about Greg Salas. I'll try to guess which one is the lie.

One time, UH had to call a timeout because Greg Salas couldn't find his helmet on the sidelines.

One of Greg Salas' favorite lines is, "Yo, drop the zero and get with the hero."

(Ed's note: I'm going with the last one, because I'm pretty sure that's a Vanilla Ice lyric.)

Status update on the John Estes for Heisman campaign please.

Who is Hawaii's most underrated offensive player?

What is the general mood surrounding the Greg McMackin coaching situation? Do fans want him out? Is support starting to wane?

It's a little negative right now, with some fans wanting him out. However, it's just halfway through his second year, and he's made a lot of positive steps in recruiting and academics. All the injuries are making it hard to judge his performance. He still does have a lot of support, but yeah, people are disappointed.

What are the odds that Hawaii becomes bowl eligible?

It'll be very tough. There needs to be a lot of improvement and stability on both sides of the ball.

Lightning round. Say the first word that comes to mind.

Too bad he's on IR

Check out Warriors Will Throw for more Hawaii info all season long.