It's time to get my Ryan Seacrest on!

The results have been tallied for the second annual OBies - Boise State's first and only midseason award show. Who came away with the most hardware? Any upsets? Surprises? Find out after the jump and voice your reaction in the comments. To the red carpet! 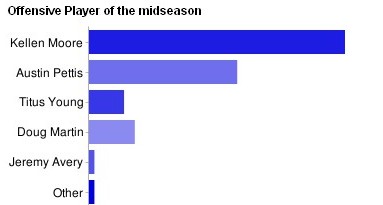 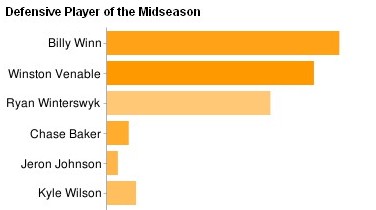 Winn narrowly edged out Winston Venable and Ryan Winterswyk in what was one of the most hotly contested categories in this year's OBies. Perhaps the most noteworthy part of this award is that Kyle Wilson was a distant fourth, something that would have been thought nigh impossible when the season kicked off. Oh well. He'll probably still get WAC DPOY because WAC media is like that.

Newcomer of the midseason

Well, this one wasn't even close. Eighty-nine percent of the votes went Venable's way. He was the Lord of the Rings Best Set Design of the 2nd annual OBies.

Young's heads-up play in the Fresno game apparently had a profound effect on the voters. Fine by me. It was huge in the game's final outcome. I almost considered using veto power here to put Winn's safety at the top, but considering the big gap between Young's play and Winn's stop, I couldn't do it with a good conscience. The people have spoken. 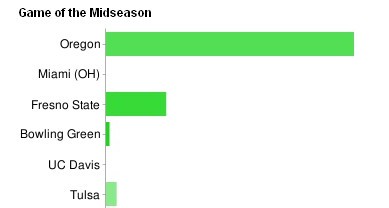 I thought this category would have been too close to call between Oregon and Fresno. Turns out, I am an idiot. The Oregon game was an overwhelming favorite (77 percent to 19 percent). Two people voted Bowling Green. I assume they're related to Titus Young.

Free STARZ Weekend award for the midseason's most pleasant surprise

The linemen finally get their day in the sun! The closest category in the 2nd annual OBies came down to the big uglies on both sides of the ball, and three votes was all that separated D-line depth from O-line greatness. Congratulations, large non-skill position players. Idaho Pizza Company buffet on me! 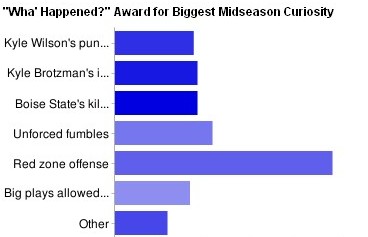 Red zone offense got bogged down and could not make it here tonight. I accept this award on its behalf.

Also receiving votes: All of the above (6), Kirby Moore's redshirt (2), playcalling (2), Kyle Wilson's INTs, "How do you pick only one?", "the spurts of brilliance and then the sputtering of mediocrity"

Best Bronco strategy of the midseason

There was lots of love going around in this category. Two-pointers took the top spot with 40 percent of the vote, but Austin Pettis jump balls and the blitzing 3-3-5 were close behind. "Toss sweeps from inside the five" was not eligible.

Also receiving votes: "Give it to Doug Martin"

Most overused cliche of the midseason 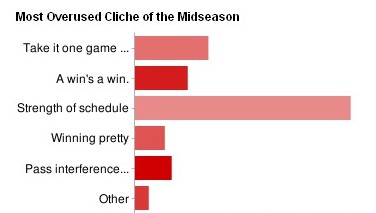 Boise State has had its fair share of cliches bandied about through the first six weeks of football, but "strength of schedule" seems to really stand out above the rest. Over half of the votes went toward SOS; runner-up "Take it one game at a time" had 17 percent.

Also receiving votes: NC game chances, "After this game, there's no one to challenge the Broncos," proverbial, BCS championship game (2), Mark May,

Best imaginary player of the midseason

Harper ran away with this award, which must make Mark Johnson pretty happy. I'm only a little disappointed that African American Richie Brockel did not receive any write-in votes or that I didn't include him on the ballot in the first place.

Midseason OBNUG award for excellence in the field of OBNUG 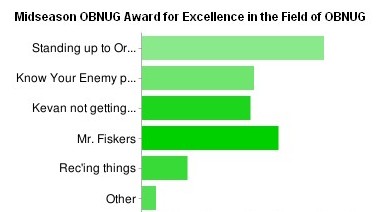 Standing up to Oregon commenters!

Take a bow, everyone. You deserve it.

This award makes me all sorts of Roberto Benigni happy. You guys took grief all summer long from proud Oregon fans who trashed your opinions, second-guessed your predictions, and generally gave you a hard time over any little perceived slight against their team. And you all held firm. Bravo. A thousand fistpumps to you.

Also receiving votes: I hate Mikrino!, munsons, Mikrino, all of the above

Reader feedback of the midseason

This category turned out even better than I could have hoped. Thanks for all the kind words from you guys. OBNUG wouldn't be OBNUG without all of you. Seriously. I'd probably have to change the name.

Here is just a sampling of the comments that I received from this category.

Just wanted to let all the OBNUG regulars know that your knowledge and sophomoric humor is appreciated.  Also, let it be known that the Marines from Charlie Co. 4th Tank Battalion in Boise are BSU fans in the good and bad times. We all watched the 2005 Georgia game at 2:00 AM in front of soldiers and Marines from the south and back east.  We were stationed in Ramadi, Iraq and we had just gotten off mission.  We all changed over into PT gear grabbed our weapons and ran a 1/4 mile to the rec to watch the game.  Best game memory ever despite the humiliation and Zabransky.

I think I'm going to create another SB Nation account just so I can rec this more than once.

Salutations to the Dark Horse, Will Lawrence.

Received! Lawrence was probably the biggest surprise of this midseason award season. Even though he didn't come away with any outright awards, he got mentioned. And for an offensive lineman, that's basically winning.

We need a public enemy #2 midway through the season.

Awesome website.  I'm telling everyone I know how you guys are several notches above the Statesman and Bronco Country combined!  Thanks for making the days between the games so interesting.

I also would like to reward the Mikrino Poll, for its originality and overall ridiculousness. Oh wait...that's me. Oh well, good job ME!

I hereby nominate OBNUG for THE Voice of Bronco Nation (in your face KIDO).  Also Mr. Fiskers for Secretary of Sarcastic Pwnage.

Kudos for allowing Bronco fan involvement with the OBie's!  Great idea (assuming all my picks are the ones selected for each award)!

Thank you OBNUG!  You've replaced the Statesman as my go to for Broncos news.

And now for some categories that you guys would have liked to see.

Best Hair-Do:  Titus Young's connect-the-dots/maze/follow the arrow/subliminal message  (as he unveiled at the Tulsa game)

Commenter of the year.  There are many that come to mind...Mikrino, The Intern, BSUisoverrated, but my vote goes to Tmunson (or Tmunsoned, something like that).

How about a mid-season award for most eagerly anticipated conference game, with the winner being "The in state rivalry game in which the opposing team will still lose by about three touchdowns but due to respect for a suddenly decent record I'll have stayed awake after the pizza and beer are gone."

I'll take these into consideration for the NUGies end-of-year awards.

rec'd to Coach Pete and staff for knowing his team and putting them in the best position to WIN every game.

And the final word for the second annual OBies goes to the following comments, which pretty well sums up this whole OBNUG thing we're all into.

I want to give a shout out to the entire OBNUG community.  Sports fans of all kinds are often filled with biased, trash-talking idiots, but this is an online community that genuinely makes me feel connected with other Boise State fans who show respect for the game, other team's fans, and for differing opinions.  I go nowhere else for my Boise State news fix.  So I extend my heartfelt gratitude to the entire OBNUG community. Let's keep it going, guys!