Gameballs for Boise State versus Tulsa

Share All sharing options for: Gameballs for Boise State versus Tulsa

The Broncos got out of Tulsa with a hard-earned victory on Wednesday night, pushing their record to 6-0 and crossing off one of the toughest road tests left on the schedule. Fistpumps all around.

With the game still fresh in our minds, let's hand out some gameballs to the deserving players, plays, and moments from Boise State's big win. I'll list my gameball recipients after the jump. Feel free to add yours in the comments. 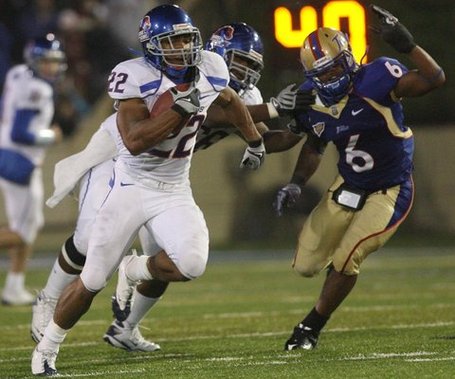 What can I say? You guys love yourselves some Doug Martin. The sophomore tailback ended the night with 112 yards and a hair under five yards per carry, highlighted by a 70-yard gross on a long third quarter Bronco drive.

Did Martin look better than Avery did against Tulsa? For sure, Martin was hitting the hole with reckless abandon and dragging defenders for extra yardage. He wasn't blowing past helpless defenders like he was against Bowling Green, but his quickness and vision worked really well with the blocks he was getting up front. Lou Holtz credited his success to some great cutback runs, and the old Lou-ster might have been onto something.

At any rate, Martin looked super for long stretches against the Golden Hurricane. If he could have muscled his way into the end zone in the third quarter or past the first down sticks on BSU's last drive, his night would have been even better.

The Golden Hurricane's playbook was most definitely on display for the world to see last night, as TU did just about everything short of the center sneak to find something that worked against the Broncos. A WR pass caught the Broncos peeking on Tulsa's first touchdown, and some serious misdirection and playaction led to the GH's last score.

The Tulsa offense in general had a lot of sneaky elements that you have come to expect seeing from the Broncos. Reverses, screens, and the like were all used to varying degrees of success by the Golden Hurricane. Which begs the question: Who is Boise State saving their playbook for? Idaho? Nevada? Next year's VaTech game?

Potter and Kellogg teamed up to affect change on Boise State's starting offensive line for the fourth time in six games. And they looked good doing it.

Potter apparently jumped Matt Slater on the depth chart, and Kellogg came in for a homesick (or, rather, sick at home) Kevin Sapien and dinged up Brenel Myers. It will be interesting to see what the lineup will be for Boise State's next game against Hawaii.

Who cares about the polls and rankings?

True football fans don't watch the game to see how big a blowout will be compared to another team's blowout, yet that's what college football has come to. OBNUG readers and commenters like OBNUG Intern and MKingery were spot on with their assessments. Buying into the BCS and the rankings is unhealthy and ludicrous. I'll let csf68 pick up the thought from there.

I am getting really bored with the over evaluation of a win. Not having a playoff in NCAA FB is sucking the joy out of close wins. This game was a fun game to watch, yet BSU fans will treat it as a moral loss; because we didn’t run up the score! The weekly beauty contest from the panel of "quality win" judges is insane. I could not believe my ears when I heard the announcers comparing Oklahoma’s win to BSU’s win over Tulsa. That is the kind of speculation we used to do in elementary school; that kind of BS talk has now penetrated college football’s daily sports talk shows…(i.e.) We beat Oregon by 11 and Oregon beat Cal by 40 points; (I whip out my calculator) according to my calculations we could beat Cal by 51 points! Right? But wait…Fresno beat UC Davis by 51 points and we beat Freso by 17 points…but, we only beat UC Davis by 18 points instead of my calculated 68 points. WARNING, SYSTEM MELTDOWN…DATA CAN NOT COMPUTE…WARNING INFORMATION OVERLOAD…AUTOMATIC SHUTDOWN SERIES IMPLEMENTED.

The best offensive player on the field for Tulsa was far and away Damaris Johnson. Forgive the Boise State defense if they can't all be more like him.

"They don't have the most athletic guys, but they're a good team and they played hard."

Boise State: Getting it done with slow-twitch mouth breathers since 1999.

Two-point conversion of the year

Not only was Efaw's conversion important in the game's big picture, it was a really good play. The sophomore tight end snagged Austin Pettis' lob with one hand, like Paul J. Schneider reaching for an apple fritter at the media buffet. Who says Boise State players aren't athletic? Oh, right; that was Damaris Johnson. 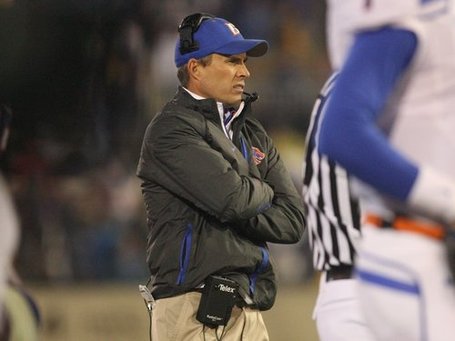 Is it just me or does it seem like Coach Pete ages a year every time the Broncos play a football game?

Somewhere, Ryan Mathews was smiling. For the second straight ESPN telecast, the Broncos were victimized by the big play, allowing two 50-plus-yard TDs to the Golden Hurricane. Is it a product of the Boise State defense being too aggressive? Would Bronco fans sacrifice some of that aggressiveness for a little more caution? 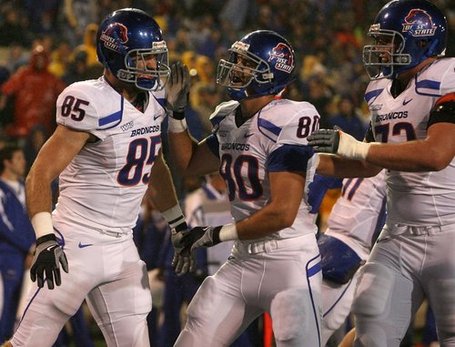 Gallarda is listed as Boise State's starter at tight end, but when it comes to catching the ball, he typically takes a back seat to the handsier Kyle Efaw. Well, not tonight.

Gallarda flashed paws that Bronco fans have rarely seen from the big TE. His first two catches of the game went for TDs, but they weren't even your garden variety TE touchdowns. The first was a slick grab in the back corner of the end zone where he tapped two toes and nearly a third before falling to the ground with the reception. His second TD catch came as he crossed the back of the end zone and snagged a Kellen Moore pass that was intentionally thrown behind him.

What's next? A Tommy Gallarda jump ball on the goalline?

Rarely do I nitpick a referee performance that actually helps out the Broncos, but there is something to be said for last night's zebra crew. Many of their calls were good. Two of them were pretty bad. A phantom pass interference penalty on a Titus Young deep ball was as bogus as they come. Then in the fourth quarter, Tulsa was penalized for a sideline infraction when a coach bumped into a referee. 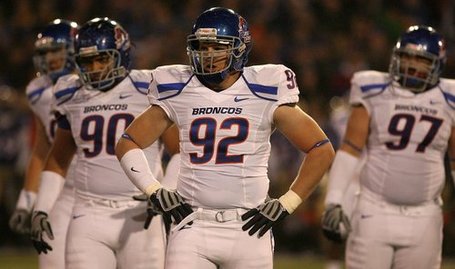 Party of the year

A lot has been written in the postgame about the effort of Boise State's defensive line. I'd like to jump on that bandwagon.

Winterswyk and McClellin combined for 5 TFLs and 3.5 sacks, spending more time in the Tulsa backfield than Tulsa's huddle did. Unfortunately for McWinterslellin, Bronco fans will now be expecting these kind of numbers every week from now until forever.

On the game's opening kickoff, Travis Stanaway popped kick returner Damaris Johnson, forcing the ball onto the turf. Tulsa recovered, and we had ourselves a close game.

Early in the second quarter, following Boise State's go-ahead touchdown, Brotzman blooped the kickoff short and into the waiting arms of a Tulsa returner who got nailed by Jerrell Gavins and coughed the ball up. Tulsa recovered, and we had ourselves a close game.

Those fumbles will go Boise State's way eventually. Of this, I am 40 to 50 percent certain.