Boise State depth chart versus Tulsa: Wilson and Sapien back from vacation

Share All sharing options for: Boise State depth chart versus Tulsa: Wilson and Sapien back from vacation

Boise State's depth chart for the Tulsa game has the distinctive flair of familiarity, which is good. Kyle Wilson is back. Kevin Sapien is back. Happy days are here again.

Join me after the jump for quick rundown of what's notable and what's not with this week's version of the Boise State depth chart. Share your depth chart thoughts in the comments.

Disclaimer: Depth charts mean as much as you want them to mean. Keep in mind that things change over the course of a game week and that game situations, injuries, and performance will render some of this depth chart moot. Still, it's fun to speculate ... with hyperbole! Mitch Burroughs will never return punts again!

Michael Atkinson is back and as big as ever

Atkinson makes his depth chart debut, sitting third-string behind Billy Winn and Darren Koontz, neither of whom have catchy, John-Candy-movie nicknames, although if they did, they would probably be Billy "Planes, Trains, and Automobiles" Winn and Darren "Spaceballs" Koontz. Chase Baker would be Cool Runnings, natch. 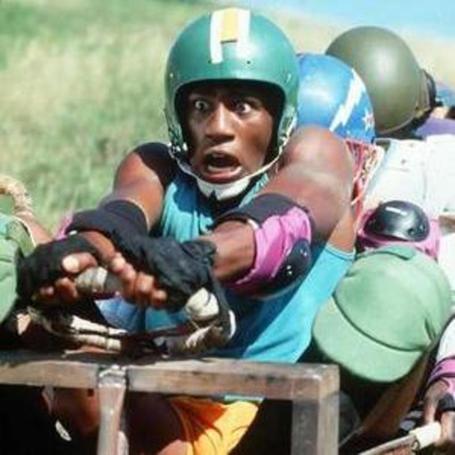 Somehow, Usain Bolt was not inspired. (via mos.totalfilm.com)

Atkinson made his American football debut last week against UC Davis, and it turned out to be a rather innocuous one as the hefty Canadian barely registered a blip amidst the general blah of the Broncos' win. He'll see better days. Those better days might start on Wednesday.

At the very least, Atkinson gives the Broncos' defensive line something it hasn't had much of so far this season: girth. Adding Atkinson to the depth chart just pushed it from Mark Schlereth after NutriSystem to Mark Schlereth before NutriSystem. Atkinson is HUGE. He has 27 pounds on the nearest defensive lineman. It might not do him much good against a high octane attack like Tulsa, but it's bound to be worth a comedic "Fat guy in a little coat" or two.

And here's a thought: Remember how Boise State struggled on the goalline last week? Remember how Michael Atkinson weighs 320 pounds and ran the ball in high school? I'm just thinking out loud here. Stranger things have happened when the Broncos had a bye week.

In other actual depth chart changes, Burroughs officially got the boot off of the PR spot on this version of the Bronco depth chart, although Chris Potter has been running back kicks for what seems like ages. And then to make matters even more irrelevant, Kyle Wilson is healthy and will return all kicks until he says so or until the Broncos face UC Davis again. So basically, move along. Nothing to see here.

Following a week off for what was deemed a "chronic neck injury," Sapien is back in the lineup, and he should remain there through the rest of the season, give or take a Utah State or New Mexico State game. I like Sapien a lot. I think he and Will Lawrence have been the two best offensive linemen for the Broncos this season. Did Myers play well in relief of Sapien last week? Yes he did. But did Myers rock the bulgy neck collar? No he did not. Sometimes you just have to learn your lessons the hard way. 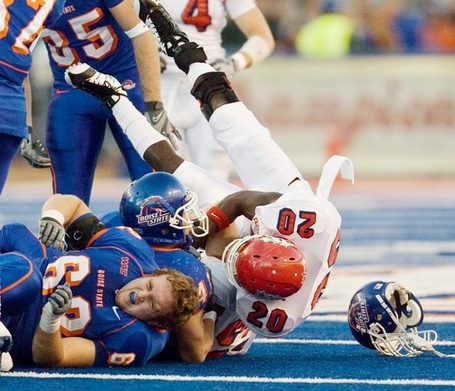 Is the Broncos' defensive line better today than it was at the start of the year?

One month ago, Boise State's starting defensive line was Winterswyk, Winn, Baker, and Root with healthy doses of Hout, Koontz, Hayes, and Nisby thrown in for good measure. Today's starting four has McClellin in relief of Root, and backups Atkinson and Greg Grimes thrown into the mix sans ACL victim Chuck Hayes. Which group would you take? I'd take today's, but it's close. That Week One group played really well against Oregon.

Tulsa's offense will pose some interesting challenges on Wednesday, not the least of which is catching your breath and covering a lot of fast little guys. In that case, what kind of defensive genius will we see from D-coordinator Justin Wilcox? I have praised the virtues of the 3-3-5 in the past, but I wonder if Wilcox will prefer to go to a look that puts an extra DB on the field instead.

Might Jerrell Gavins get more playing time this week? He's the presumptive third corner, now that Jamar Taylor has been ruled officially redshirt for the year. Might the Broncos go with three down linemen and blitz to provide pressure? Baker and Winn would be the most likely sub-outs, but each of them seems to have no trouble getting to the passer anyway.

Long story short, I have no clue. Fortunately, Justin Wilcox does.

Kyle Wilson returns from being "out with apathy"

Wilson will play this week after sitting last week to nurse a sore shoulder, made even more sore by the numbing reality that UC Davis is not a Division I-A opponent. Is Wilson 100 percent? He's been talking like it. I don't really care what he says so long as he can lock down an entire side of the field on Wednesday night. He can take the Hawaii game off if he can manage that.

Have you hugged your Will Lawrence yet today?

At the beginning of the season, when everyone was putting together their blind guesses at the Broncos' starting O-line, Lawrence and Michael Ames were the two biggest surprises on a unit that returned a lot of experience. Now that Ames has gone the way of Aaron Tevis 2008, Lawrence is the only surprise starter left, and he has been one of the most solid offensive performers all season long. A thousand fistpumps to you, Will Lawrence. Hugs all around. Except from David Augusto. He has a Christmas-gram planned. 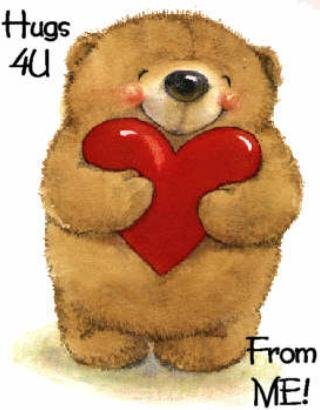 Austin Pettis continues his stranglehold on the holding duties, which is good news for successful PATs and perhaps even better news for surprise two-point conversion attempts. Apart from a good transition sentence, I'll just jump to the chase. Do you all like those gimmicky two-point conversions? Would you rather just see the Broncos kick it every time? Personally, I'm a fan because I know that the Broncos only do them if there is a good chance that they will be successful. Pettis is obviously reading something in the defense, and if he's not, then I don't want to know about it because that would stress me out and change my answer. Two point conversions are good, pending evidence to the contrary. How about you?

For some reason, Burks remains on the depth chart, as an OR with Chris Potter underneath Titus Young. The entire Burks family will continue to be confused as to whether or not they should buy tickets to upcoming games.

Is Greg Grimes in the Broncos' future?

Grimes missed the first part of the season with a leg injury but returned to the D-line rotation last week. Still, he can't crack the depth chart. Is this a sign of anything other than depth chart politics? Will he play against Tulsa? Hard to tell, but you have to think that Boise State will want as many fresh linemen bodies as possible.