Since the schedule was released earlier this year, the Tulsa game has been cause for great consternation among Bronco Nation. How will Boise State handle Tulsa's no-huddle, fast break offense? Will a Wednesday night road game affect the outcome? Can the Bronco offense find success against that vaunted Tulsa D?

OK, so that last question wasn't exactly on anyone's mind. But after five games of the 2009 season, Tulsa's defense looks better than ever. Can the Golden Hurricane shut down the run on Wednesday? Join me after the jump as I discuss that and other factors for Wednesday's showdown. Feel free to share your own analysis in the comments.

Malzahn's loss, coupled with the graduation of QB David Johnson and the loss of 2600 yards of offense from Tarrion Adams and Brennan Marion, might have been cause for other teams to be concerned, but not Tulsa. At least, not yet. The Golden Hurricane have streaked to a 4-1 start with the only loss coming on the road to Oklahoma. Speaking of that loss:

The Oklahoma game aside, Tulsa had played with a revitalized defense and the same cutting edge offense as always. Offensively, there have been hiccups (like 19 allowed sacks), but overall, there is not too much to complain about. Here's to the good times!

Rice is bad. Tulsa is good. Yet the Golden Hurricane and the Owls entered the second half tied at 10, and the game didn't reach a three-score margin until early in the fourth. Wait a second. Bad opponent, rain, sluggish effort? I think I've seen this movie before.

While rain made life miserable for the announced crowd of 11,420 at Rice Stadium, a swarm of TU defenders dominated the Owls’ offense.

Tulsa controlled the line of scrimmage and held Rice to a season-low 191 yards, including just 87 after halftime. Rice averaged just 2.7 yards per snap.

The Hurricane (4-1 overall, 2-0 in C-USA) needed every bit of the strong effort against a resilient Rice team in the opening 30 minutes.

The halftime score was knotted at 10 as Tulsa was sluggish in the first half.

Give Tulsa a UC Davis-esque mulligan on this one.

You probably know of Tulsa's offense through reputation. The frenetic, no-huddle style of Tulsa fits its skill players well, and can wear out opposing defenses. Kinne, a Texas transfer in his first season as the starter, has 1142 yards and 10 TDs and has only been picked off by Oklahoma (granted, eight of his 10 scores have come against New Mexico and Sam Houston State). WR Damaris Johnson is the team's biggest offensive weapon, as he leads in receiving with 369 yards, though he's only reached the end zone once. Kinne is the team's leading rusher (173 yards); Jamad Williams is close behind (169). Running is not Tulsa's best feature.

The defensive side of the football might be Tulsa's biggest surprise this season. For the past couple years, Tulsa was awful on D. This year, they are No. 27 nationally overall and No. 16 against the run. Their 3-3-5 formation allows for lots of variation in coverage and blitzing. Teams typically have more success running against a 3-3-5, although that has not been the case this year.

Johnson has been solid on punt and kickoff returns this season, taking a punt back for a score against Tulane.

Brown plays the Bandit position for Tulsa, which is similar to Boise State's nickelbacker hybrid, and like Ellis Powers last year and Winston Venable this year, Brown is in on a lot of plays.

He leads the team in tackles with 36, and he has recorded an INT and a forced fumble so far this season. Even better for Tulsa, Brown is just a sophomore, and he appears to be taking big strides. By 2011 when Tulsa returns the one-and-one series at Boise State, Brown could very well be C-USA's best defensive player and a real force to be reckoned with. Boise State will have to account for him on Wednesday night, for sure. 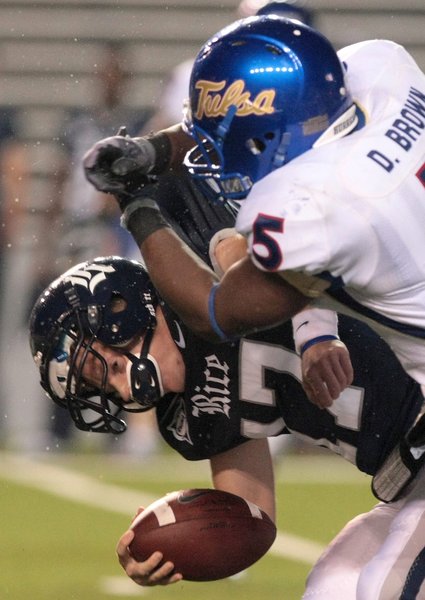 "Not in the face!" (via www.tulsaworld.com)

Surprise, surprise, Tulsa has been very strong on run defense this season. How strong? I can't really tell.

Any time you can hold multiple teams to less than 60 yards rushing, you are definitely doing something right. Let me be clear about that. Tulsa's run defense is certainly not bad by any stretch of the imagination.

However, their No. 16 national ranking against the run is not quite as threatening as it looks. Out of Tulsa's five opponents this season, only one is in the top 95 in the country in running the football. Two teams are 100 or worse, and a third doesn't play Division 1-A football. Tulsa should be shutting down the running games for these teams because the running games for these teams just aren't very good.

Also, in each of Tulsa's four wins, the Golden Hurricane has been ahead late in games, forcing opponents to abandon the run. Rushing defense always looks better on teams that are ahead all the time.

Ask any Bronco fan whether they'd take Boise State's rush offense from this year over BSU's rush offense from last year, and the answer will almost always be, "Yeah, duh." The Broncos have looked better running the ball in 2009. But looks can be deceiving.

Tom Scott did some research on the Bronco running game last week. His results:

Over the first five games, the Broncos have had eight rushing plays go for 25 yards or longer, averaging a staggering 49.8 yards on them. The other 177 runs have averaged 3.7 yards a carry. Versus the Aggies, BSU netted just 3.1 yards per tote, and its longest run was only 13 yards by Jeremy Avery. The Broncos are hoping for a better sprinkling of those 10 to 15-yard bursts that have been a staple of their running game over time--a staple of any good running game.

So wise. He's like a miniature Buddha covered in hair.

Keys to the running matchup on Wednesday

It will be interesting to see which part of the Bronco offense that Tulsa plans to take away. Will they focus on the run to make Kellen Moore beat them? Will they take away the deep pass and force the Broncos to chip away? We should be able to tell after the first couple series on Wednesday night. If the running game ends up becoming a big factor, here are some keys to watch to see who will get the upper hand.

Stick with your assignments

This one works both ways. Tulsa will want to play assignment football, making sure no one gets out of position or overreacts to misdirection. On the other side of the ball, the Boise State offensive line needs to make the right block and get on the guy they're assigned to. Last week against UC Davis, BSU had multiple missed assignments, especially near the goalline, and it cost them in the final rushing numbers.

Making plays in the backfield will be a big key for Tulsa's run defense. Boise State's running plays from the shotgun can be stymied by pressure up the middle and off the ends. The myriad sweeps and reverses that the Broncos like simply won't work if backfield pressure is there.

Doug Martin has shown a propensity for busting through tackles, and Jeremy Avery is always hard to bring down. If they can work some more magic against Tulsa, the Bronco ground game will certainly benefit. Flip side: Tulsa needs to fly to the ball to cover for anyone who misses a tackle.

Boise State does some creative things to get Avery the ball with room to operate. If Avery can get to the edge or find some holes up the middle, he'll have a good game.

Matchups from motion and shifts

Another Bronco staple is presnap movement, and Tulsa will have to be ready to adapt to what the Broncos throw at them.

Pass rush. Tulsa has allowed 19 sacks so far this year, and they are minus a top-flight LT. A few Boise State sacks would go a long ways toward ending Tulsa drives and neutralizing the Golden Hurricane offense.

Special teams. Kyle Wilson has yet to break a punt return, but his counterpart has. Kick coverage will be key, and any chances Kyle Brotzman gets, he'll need to convert. Tulsa can score in bunches, and Boise State will need to get points whenever they can.

CB play. The Broncos looked shaky last week against UC Davis with Brandyn Thompson and Jerrell Gavins on the corners. Will Kyle Wilson's return make a big difference? I'm curious what kind of schemes Justin Wilcox will draw up to defend Tulsa. The 3-3-5 maybe? Something new? You don't want to give that guy extra time to plan for you. Right, Chip Kelly?

Kellen Moore. He often gets lost in pregame build-up like this, but he will have just as much impact on Wednesday as anyone else. If he's sharp, he could easily take the Broncos on long marches down the field, which would help keep the Bronco defense fresh and the Tulsa offense on the sideline.

Coaching. Wilcox and Harsin will certainly have some tricks up their sleeves for this one. Coach Pete is sure to have the team ready to play following last week's semi-letdown. Can Coach Pete outcoach Todd Graham? Will Tulsa have any surprises for the Broncos?

Others. What ones can you think of?

What factors do you think will be most important on Wednesday? Will the Bronco defense be able to contain the high-powered Tulsa offense? Will it be Oregon redux or UC Davis blahfest? Share your thoughts in the comments. Let's discuss.