Though Jeremy Childs and Ian Johnson will be stealing most of the draft attention as far as Bronco fans are concerned over the next three months, we'd like to point out that there is another BSU player who could end up having more of an impact than either of these two offensive stars. No, it's not Brock Jaramillo. But good guess.

We're talking about Vinny Perretta. NFLdraftscout.com is, too. Look what we found on the NFLdraftscout homepage. 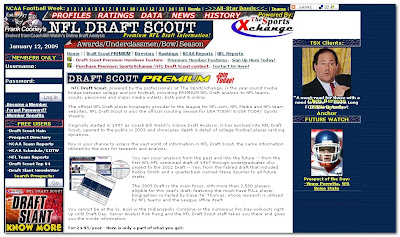 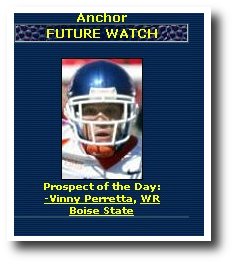 Boise State's own Vinny P. was featured on the front of one of the draft's preeminent sources of knowledge. Now, it should be noted that when we refreshed the page, a different player appeared, but the mere fact that Perretta found a spot on the front, for however brief a moment, was exciting.

In an NFL where Wes Welker can lead the league in catches, players like Perretta are becoming a hot commodity. He's shifty, sure-handed, and made for that slot position. Don't be surprised if Perretta finds a spot on an NFL roster next season.

But do be surprised if very many people are talking about it.