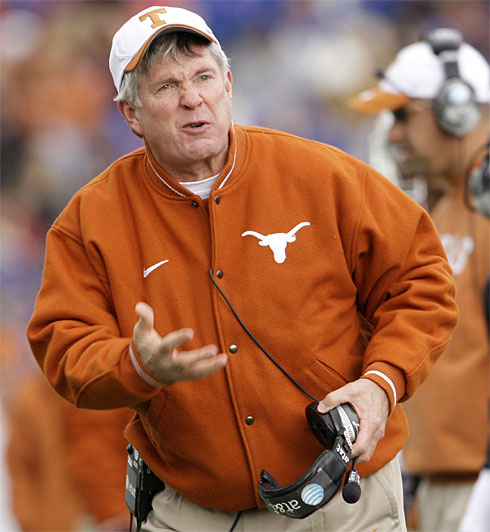 Tonight's Fiesta Bowl between Texas and Ohio State is expected to be rather boring and one-sided. Thank goodness How I Met Your Mother is on.

Perhaps the Fiesta Bowl would be more exciting if there wasn't a potential national champion Texas squad intent on crushing anything and everything in its wake versus a dud Ohio State team intent on sucking. Perhaps the bowl needed a different matchup. Perhaps it needed a non-BCS school.

Now, we made a promise several weeks ago to cease and desist with the talk of how Boise State deserved a Fiesta bid over Ohio State. It was unbecoming of us, even though we knew we were right.

Utah made it apparent this season that the little guys can play with the big 'uns, so it makes sense (and makes for good TV) to have deserving teams play up a level and see what happens. Even the less deserving would be attractive. They'd certainly draw more attention than Terrelle Pryor blowing off media day.

Take a look at the following matchups and tell yourself you wouldn't be at least intrigued to watch.


Of course, it's too late to change anything with the Fiesta Bowl, and with hindsight being 20/20, there's probably no way that bowl organizers knew this game would be so much of a dud. We're stuck with Texas vs. Ohio State tonight ... unless we have CBS. Which we do. Thank goodness.