Combine invites are out; Ian Johnson's lost in the mail?

Share All sharing options for: Combine invites are out; Ian Johnson's lost in the mail? 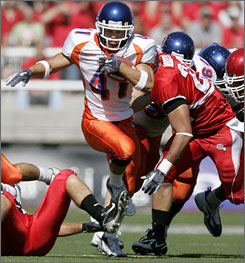 The NFL has sent combine invitations to a number of players this week, yet there is no word yet if any of the Broncos made the cut. The silence on the Idaho Statesman blogs is deafening.

The official invite list will probably not be made public until all of the underclassmen have had a chance to declare for the draft (the deadline for doing so is next week). In the meantime, we are left to wait and wonder if any Broncos will follow in Ryan Clady and Orlando Scandrick's footsteps.

The most obvious candidate for Boise State at the combine would be senior Ian Johnson who was widely considered to be a hot commodity following the 2007 Fiesta Bowl. Obviously, things have changed, leaving Johnson's sure-fire inclusion in the NFL's annual meat market up in the air.

When will we hear one way or another? It's anyone's guess. Word has been slowly leaking out from various schools about which players have received the invitations, so you'd have to assume that Boise State or the Statesman or Dustin Lapray and his Blog o' Wonders would have word soon. Here's a taste of who's already in. It would be a shock if Johnson wasn't among them.


We'll let you know as soon as we know about the fate of Johnson and fellow seniors Andrew Woodruff, Ellis Powers, Vinny Perretta, and Kyle Gingg. As for senior K Brock Jaramillo, we wouldn't hold our breath.