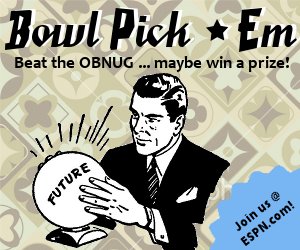 Bowl season claimed the credibility of the Alabama football team, and it has claimed the OBNUG's Bowl Pick 'Em entries of all but three participants.

We've said good-bye to Plaxico's Pistols, GHM's Hot Wife, womanman, and McGroin. We found out that Grace Van Pelt Rules does not, in fact, rule. And we discovered that there are at least 54 people who know more about college football than OBNUG's Kevan. That number will inevitably grow by the time the national championship game is over on Thursday.

Through the maelstrom of crushed dreams and wasted confidence points on Texas Tech, three entries have risen to the top. Envy them.


We're proud to say that two of the three are OBNUG employees, although only one of them is actually on the payroll (we're efforting, intern). But before you cry nepotism, know that ESPN's bowl pick 'em software is nigh impenetrable. We tried. And failed.

If you're one of the top three, keep a close eye on the next four days when the fate of OBNUG's Pick 'Em and the shipping address of a free magazine subscription will be determined. If you're not one of the top three, take solace in the fact that there are 71 others who can sympathize with you ... including OBNUG's Kevan.