And the Player of the Year NUGie goes to ...

Share All sharing options for: And the Player of the Year NUGie goes to ...

NUGie Player of the Year


Presented by God, who happens to be a big Boise State fan:

Wow, the NUGies. This is not really what I had in mind when I created man in my image, but I'm not complaining. The swag for presenters is pretty great.

I've been a Boise State fan for a long time - since before the creation of the world, really. So I know just how impressive this collection of candidates is for NUGie Player of the Year, and I know what kind of greatness these players will achieve throughout their career. I won't ruin any surprises, but I'll just say that the Vandals won't know what hit them.

Here then is the list of nominees for NUGie Player of the Year:


And the NUGie Player of the Year award goes to ... 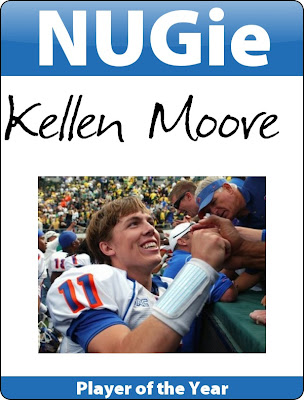 Congratulations to Kellen Moore. With the defense making its mark as a unit, Moore was the only thing the offense had going all season long. wilson and Johnson were very deserving, but Moore's individual success was just a little greater.

That concludes the first annual NUGie awards. Congratulations to all the winners, and thank you all for following along. Tip your waiters, buckle up, and head over to David Augusto's bachelor pad for the after party. He may or may not know we're coming.