And the NUGie for Offensive MVP goes to ...

Share All sharing options for: And the NUGie for Offensive MVP goes to ...

Salutations and obeisances to you all. I am honored and beholden to present the NUGie for Offensive MVP, or, as the french say, la joueur plus de grande valeur. Excellence in offensive football is akin to a cacophony of mountain bluebirds, twittering with gusto a love song to philanthropic Mother Nature . It is beautiful, like a freckled Southern Belle drinking cherry cola from an ornate stein. And these men have achieved it.


And the NUGie Offensive MVP award goes to ... 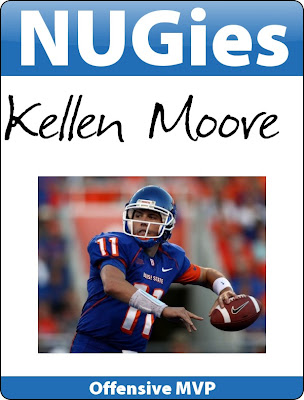 Congratulations to Kellen Moore. Without Moore being part of the offense, the Broncos would not have had the same level of success that they did. We hope he celebrates by watching gametape of Oregon's Holiday Bowl defense.