And the NUGie for Goldenest Arm goes to ...

Share All sharing options for: And the NUGie for Goldenest Arm goes to ...

OK, is this some sort of a joke? I throw just fine, if that's what you are insinuating. I completed 79 percent of my passes against the Vandals, just so you know. Sevent-nine percent. What's up now?

Here are the nominees:


And the NUGie Goldenest Arm award goes to ... 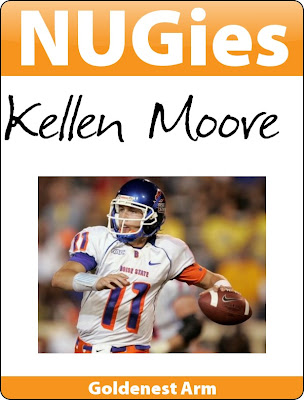 This is Kellen Moore's second NUGie. He also won a NUGie for Offensive MVP, and he is nominated for NUGie Player of the Year, which will be handed out on Friday. He was also up for the NUGie Most Tebow-like Perfect Human Being, but that category was discontinued due to overuse.