And the NUGie for Favorite Play goes to ...

Share All sharing options for: And the NUGie for Favorite Play goes to ...

It's Division I football! It's the NUGies! This ain't the Idaho Statesman players of the year. If you want a safe, unspectacular award ceremony, go pick up a Parade magazine, brother.

Bigger isn't better; Boise State is better. And as these plays show, the Broncos were at their best this season.

Like a wise man once said, "He who questions training only trains himself at asking questions." Also, "When you care what is outside, what is inside cares for you." And, "Leave me alone, David Augusto." With these teachings in mind, here are the nominees for NUGie Favorite Play ...


And the NUGie Favorite Play goes to ... 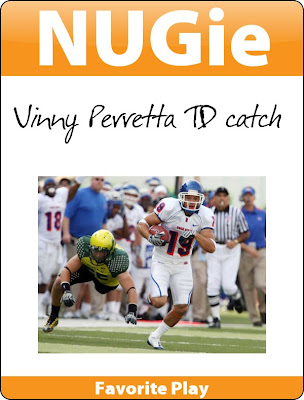 Congratulations to Vinny Perretta TD catch. If this award were judged solely on the number of fistpumps and breathless "Yes"'s we did at the time, it would have been a landslide.