And the NUGie for Defensive MVP goes to ...

Share All sharing options for: And the NUGie for Defensive MVP goes to ...

Boise State's offense might get the glory, but it is Boise State's defense that provides the guts. Guts that hold opponents to one touchdown per game. Guts that bend but don't break. Guts that force turnovers and make plays and take away what other teams do best.

Boise State's defensive performance this season was integral to the overall team success. without the play of big hitters like Jeron Johnson and Ellis Powers or stingy DBs like Kyle Wilson and Brandyn Thompson, Boise State would have had a much harder time coasting through the regular season undefeated.

The defense made a name for itself in 2008. Shutout. And they forced Bronco fans to look at the team in a different way. Paradigm shift. The mark that the BSU "D" left on opponents and on Boise State history will last for years to come. Tattoos. And we have these people to thank.

The nominees for NUGie Defensive MVP are:


And the NUGie Defensive MVP award goes to ... 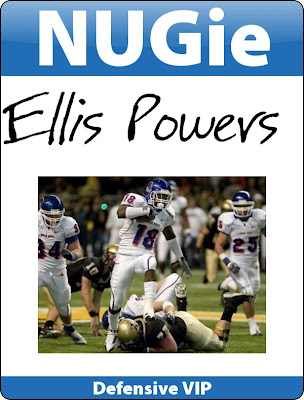 Congratulations to Ellis Powers. His contributions on defense represented a seismic shift in attitude and strategy for the Broncos this season, so we felt he deserved to be recognized as the most valuable player on a revamped unit.