And the Marty Tadman Honorary NUGie goes to ...

Share All sharing options for: And the Marty Tadman Honorary NUGie goes to ...

What an honor to be associated in any way at all with Marty Tadman, even on a fake award show that I made up off the top of my head. This is one of the top five moments of my life (and, I assume, Marty Tadman's).

The Marty Tadman Honorary NUGie for excellence in the field of Marty Tadman is designed to recognize the Boise State player who most embodies the virtues that Tadman brought to the team: leadership, teamwork, trust, human perfection, responsibility, athleticism. Here are the nominees: 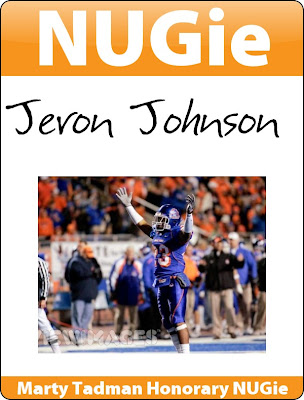 Congratulations to Jeron Johnson. His Poinsettia Bowl performance sealed the deal because it was so reminiscent of Tadman's bowl heroics. Now if Johnson can start working on that human perfection stuff, we'll be set.