The Harris Poll: confounding everyone since 2005

Share All sharing options for: The Harris Poll: confounding everyone since 2005

The Harris Poll makes up one-third of the BCS formula, and that is really too bad. Let's have Larry Keech and Earle Bruce explain.

Keech and Bruce are voters in the Harris Poll - one (Keech) a retired sportswriter from Greensboro, North Carolina, and the other (Bruce) a former head coach at Iowa State, Ohio State, and Colorado State. How they became Harris Poll voters is anyone's guess. (For the record, our guess is that we're dreaming and they're not Harris Poll voters and someday (hopefully soon) we'll wake up). And from the looks of their polls, they don't really belong.

We'll start with Keech, because we at least appreciate his method. Keech appears to rank teams based first and foremost on their number of losses. As such, his poll looks like this: 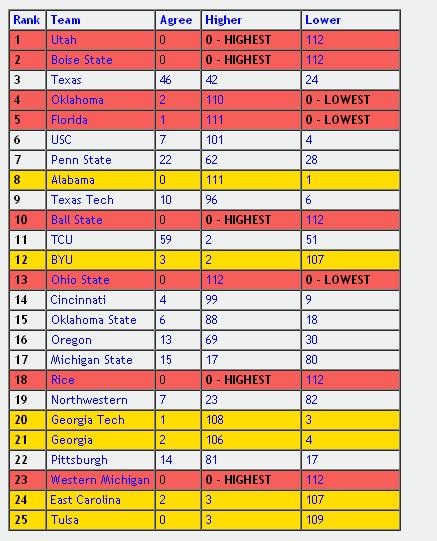 Now, we are quite happy with his placing the Broncos at No. 2. But when he starts pulling crazy stunts like putting Ball State above Ohio State and sliding Rice into the Top 20, then one has to wonder.

But Keech is a savant compared to the polling styles of Bruce. Keech's poll choices at least made mathematical sense. Bruce's are just plain odd. 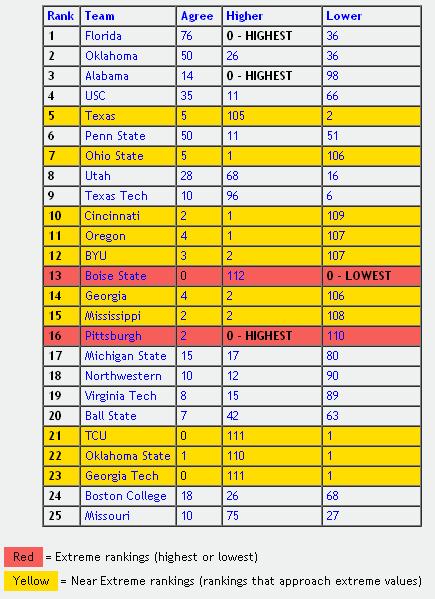 For beginners, Bruce has the Broncos ranked at No. 13, the lowest ranking of any other voter in the Harris Poll. On top of that, the Broncos are behind Oregon, whom BSU beat back in September and who currently has three losses to Boise State's zero. Also ahead of Boise State is two-loss BYU. And oh, by the way, the Cougars are ranked nine spots higher than the TCU team that beat them.

And to think, these are the people we are trusting with our team's futures. Scary.